A piston valve is a pilot operated valve. It is very similar to a diaphragm valve in theory, but replaces it's flexible diaphragm with a rigid cylinder. There are 2 varieties; barrel sealing and chamber sealing.

In a barrel sealing valve, the piston seals against the breech of the barrel. This is the most common piston valve design.

The piston is often a well fitting cup-shaped object, such as a end cap. To provide a sealing face, a piece of rubber is attached, typically with a bolt. In the simplest case, equalization is accomplished by allowing the air to leak past the piston and into the chamber. Some people will machine their own pistons, in which case they often build O-rings into them. With the O-rings, you need to make a small equalization hole; sometimes this is fancied up to be a homemade check valve.

Because a piston is heavier and harder than a diaphragm, and PVC is somewhat brittle, it is recommended that a bumper of sorts is built into your pilot volume. Common bumpers include heavy-duty rubber hose, and such. This is labeled "F" in the "use, barrel sealing" diagram.

These valves are often used on coaxials and over/unders. In an over/under, the valve is built in a "T" fitting. The barrel is put co-axially through one end, the pilot and piston are put in the opposite one, and a chamber is connected to the perpendicular opening with a 90° elbow.

A commercially manufactured valve for spudding is the Mauler Valve. 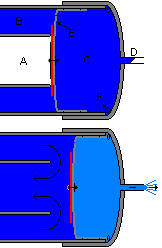 There is a common misconception that a simple blowgun is enough to pilot large piston valves, 1.5" and above. This is not recommended as your cannon will have very bad performance or may not even function at all. For valves 1"-1.25" in diameter, a 1/4" ball valve is recommended. For valves between 1.5" and 2.5" a 1/2" or 3/4" ball valve is probably enough. Anything above that will benefit from a sprinkler valve or a 1" ball valve for a pilot valve. When it comes to pilot valves, bigger is always better.

The piston of a chamber-sealing piston valve has to seal on both the chamber port and to the pilot volume. This requires that the piston be machined with O-rings. A small equalization hole is required; sometimes this is fancied up to be a homemade check valve.

The piston is almost always housed in a "t" fitting.

Because a piston is heavier and harder than a diaphragm, and PVC is somewhat brittle, it is recommended that a bumper of sorts is built into your pilot volume. Common bumpers include heavy-duty rubber hose, and such. This is labeled "F" in the "use, chamber sealing sealing" diagram.

These valves are often used on over/unders, as the flow is already turned around 90o.

A commercially manufactured valve for spudding is the Supah Valve. 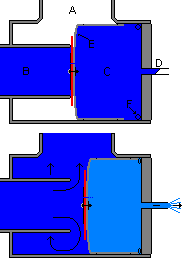 When the piston moves back, the smallest amount of area exposed is either the area of the circular cross section of the barrel or the area exposed by the piston, which is the side of a cylinder, the bases being the barrel and piston face. The optimal ratio of area exposed between the 2 spots is 1:1, which means the exposed areas should be the same. So one sets the equations A and CT equal, that is A = CT.

Solving for "T" results in:

Many people choose to open larger to provide only one restriction to flow instead of 2 the same size in a row. This is done by allowing the valve to open fully unrestricted and then compress the bumper while opening further. This provides the fastest possible opening time by preventing the piston deceleration while still opening.

The operation of barrel sealing valves falls into 3 categories which is related to the dimensions of the barrel seal or seat to the piston outside diameter.

When the ratio is large in a barrel sealer with either a large piston or small barrel, most of the force to open the valve is controlled by the differential of the chamber pressure and pilot area. As the valve opens, the small area that becomes exposed to the chamber as it opens contributes little to the opening speed. This large area ratio valve are noted for reliable operation as they have the ability to open pistons that don't slide well. Due to the pressure still in the pilot area as they open, as the chamber vents out the barrel, it is often faster than the pilot, so the force used to open the valve vanishes and the pilot pressure unable to keep up with the drop, forces the valve to close. If this repeats as the pilot vents, it is noticeable as honking. This class of valves include pistons with a 2:1 diameter ratio or more. A 2:1 diameter ratio is a 4:1 area ratio. These are not QEV valves because the area sealed by the piston is only 25% of the pilot area so when the valve opens the force change is small. It opens with the pilot at 3/4 the pressure of the chamber. When it opens and the pilot volume is reduced by the piston moving into the pilot space, the rise in pressure in the pilot prevents the piston from opening all the way, so opening speed is directly related to how much faster the pilot can vent over the rate the chamber vents out the barrel. A slow pilot equals a slow valve and may cause honking.

In a chamber sealer version where the valve seat seals against the chamber, they are fast as the pressure is released and more pressure presses on the larger exposed face of the piston. This style tends to have a fairly large dead space between the valve and projectile. In addition a large piston has a greater mass and as the piston moves, it requires a larger displacement using much of the chamber air energy. If the valve seat is small to use a smaller piston, the small orifice chokes the flow.

One attractive feature of this valve is once it unseats and starts to open, the chamber pressure now acting on the face of the piston causes a large spike in opening force as the large barrel facing area is now exposed to the chamber pressure. This type of valve snaps open and is known as a Quick Exhaust Valve or QEV. This style valve is not prone to closing early and honking. 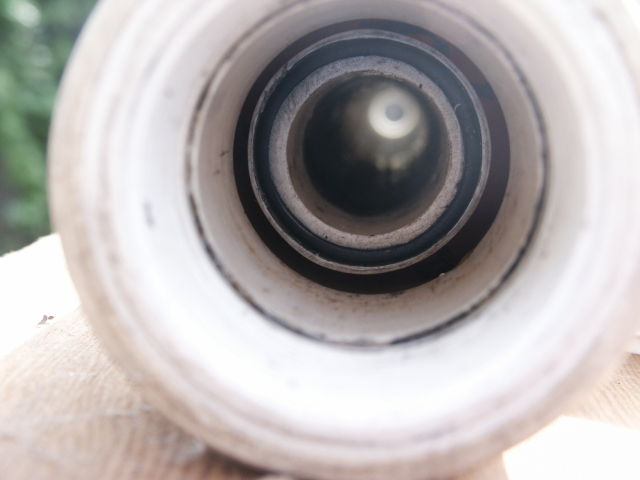 Chamber sealer valves have a disadvantage of needing a larger diameter piston for the same size valve seat as a barrel sealer. This adds mass and dead space between the valve piston and projectile. On the positive side, they are more reliable in opening and tend to have most of the opening acceleration early in the opening where it is needed. The drop in acceleration as the valve opens can increase the life expectancy of the valve as they compress the pilot area they slow before impact with the back of the breech.

If the ratio of the piston diameter is reduced to the diameter of the valve seat in a spool valve, then the valve won't open even when the pilot area is not under pressure. If the chamber is pressurized and no pressure is in the pilot area, the valve has the least back pressure of any of the piston valves and therefore the fastest opening when the valve is unseated by force. Even though the pilot area may half in volume as the piston moves into this space, the pressure rise from 1 atm to 2 atm is still less than the chamber force on the newly exposed face of the piston, so this piston will open fast regardless of the vent size or speed. This last category of piston valve is known as a Quick Dump Valve. To operate this valve in an air cannon, consideration must be made to mechanically move the piston and when the piston moves, the force will avalanche quickly as the piston face becomes exposed to the chamber pressure. For mechanical trigger the use a rope pull or a rod with a "sliding" piston are options to a spring or air start. The loose piston on a rope or rod provides speed as the core can accelerate freely when triggered. Decoupling the triggering mechanism from the piston prevents the trigger from adding to the moving mass of the piston. These valves are not subject to honking, but may "bounce" back closed after the shot by the pressure built up in the pilot area and bumper recoil after the chamber pressure is gone. 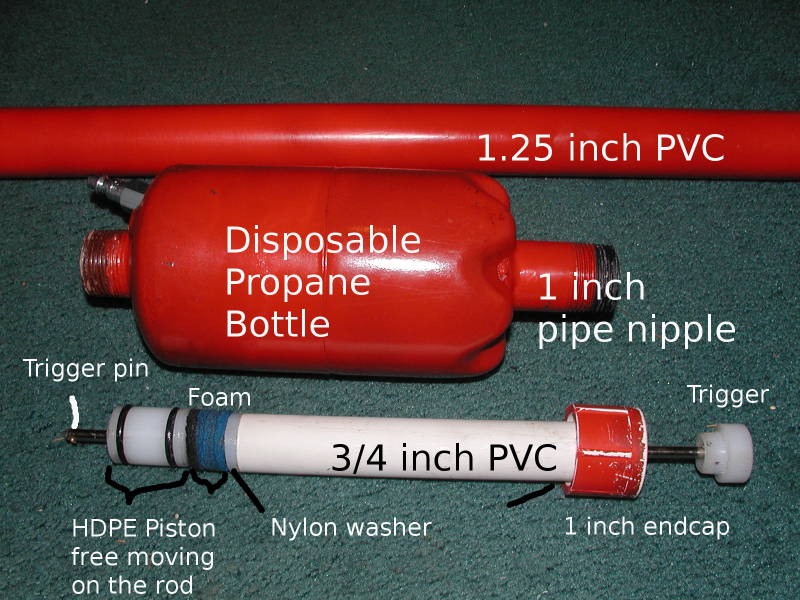 Assembled 1 inch QDV cannon and damaged can. Projectile was a 1 inch jawbreaker. 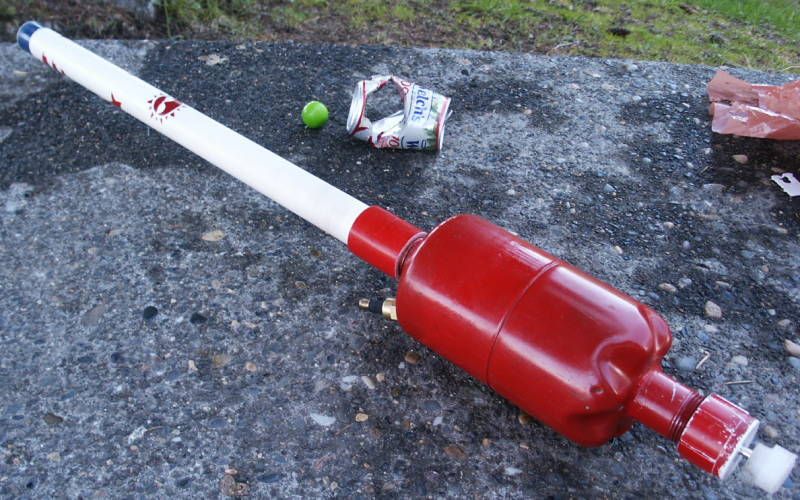 The quick dump valve has the piston OD the same size as the seat. It requires an external force to start it opening. It has no pilot pressure to hold it against a seat so it is often built with o rings on a piston. The valve cylinder can be built out of a pipe with ports cut in the side.

A video on the theory of the QDV cannon is here. The Quick Dump Valve

O-Ring Considerations on a Piston Valve

To prevent stuck piston valves, consideration must be given to permit a good seal while not stopping movement.

To prevent stuck or hard to move pistons the o ring should not be compressed flat against the cylinder wall. Since movement is desirable, as well as a seal, we can design the piston to seal without needing to squeeze the o ring. The following video shows the theory fairly well.

At 4:20 in the video the force needed to move this piston is shown.

Instead of having O rings in a groove that sit tight against the bottom of the groove and then are compressed by the cylinder, floating rings do not bottom out in the o ring groove. To seal, the pressure trying to blow past the ring seats it against the side of the o ring groove. Air that is able to get under the ring presses outward to apply pressure to the cylinder wall. As the pressure is increased, this force is increased so higher operating pressures make a tighter seal and a little higher friction to movement.

Floating piston rings fit loose in the grooves. The o ring is sized to be slightly larger than the cylinder diameter it slides inside. This photo is of a 1 inch quick dump valve piston. 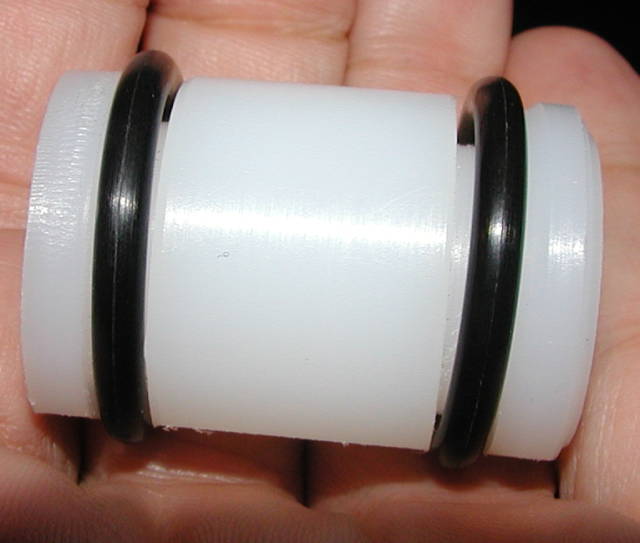 Here is a drawing showing the force of the pressure on the o ring to provide a tight seal. 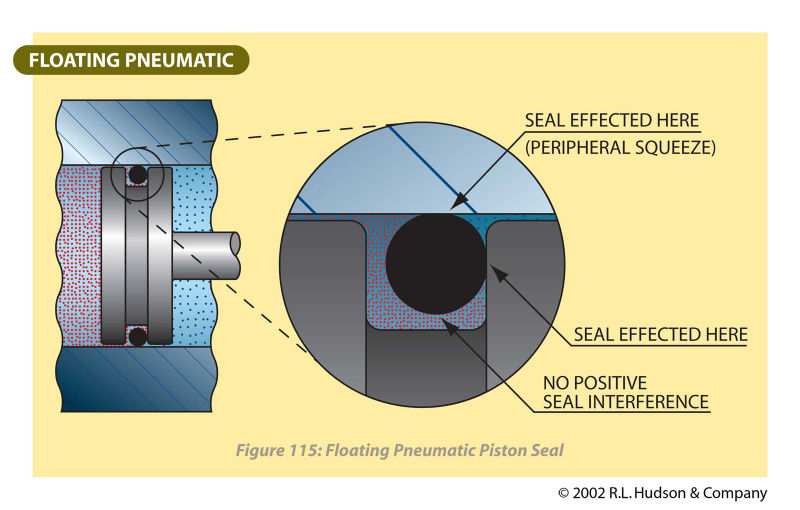