A Schrader valve (sometimes Schraeder), often called a "tire valve", "tank valve" or "sniffler valve" because Schrader is a brand name, is used in hybrid and pneumatic launchers to allow you to fill them with air. They are also used, less frequently, in combustion launchers as fueling ports or as vent ports.

These valves can be mounted in various ways, depending on the sub-variety that you purchase:
1) Threaded into a tapped hole.
2) Clamped on both sides of the workpiece (as with some automotive valves).
3) Epoxied in place (as with weird or salvaged valves).


For plastic guns, it is generally considered to be a good idea to install a schrader valve in a joint. The double layer of plastic at the joint strengthens the area around the hole and the thicker plastic gives more depth for the threads.

A schrader valve accepts the standard air chuck used to fill tires, allowing you to fill them with a standard bicycle pump or tire filling adapter on a compressor. Alternative valves exist, most notably the female quick disconnect which is more expensive but has a larger port diameter giving greater flow rates. 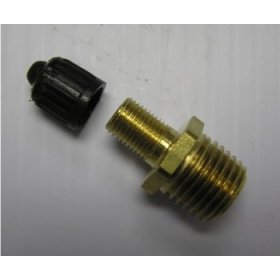