A stungun being modified for use in an ignition system

Stun guns create a large high voltage spark, and are therefore useful as ignition sources. They are one of the simplest to set up, the spark gap is simply connected to the main electrodes. The spark gap needs to be smaller than the default gap for the circuit to function. If a gun has multiple spark gaps then the total spark gap length must be less than the default gap. Stun guns provide the highest voltage of the common ignition sources, 50-900KV (KV=thousand volts), but spark length is limited by the default gap, which is typically 0.75" to 1" (20~25mm). They are generally powered by one or more 9V batteries. The trigger switch only carries battery voltage, so it can be replaced with a remote trigger switch in a more convenient place (see also remote control).

How A Stun Gun Works

A typical stun gun circuit is fairly simple. If it weren't for the specialized transformer required it would be relatively easy to build your own stun gun from scatch. For a description of how a typical stun gun works see here.

The entire stun gun circuit can be removed from the original enclosure and mounted in a project box or other suitable container, though the default gap should always be left intact to prevent over voltage and internal arcing. If the stun gun has been transferred to a new enclosure it may qualify as a high voltage power supply instead of being considered a "stun gun".

Characteristics of a "Good" Stun Gun for Spudding

One characteristic of a stun gun that is frequently used to judge how "good" it is is the manufacturer's claimed voltage; 20KV, 50KV, 100KV, 300KV etc. Be warned that these voltages are generally grossly overestimated and are really of very little use. The maximum working voltage of a stun gun is limited by the default gap (and any inadvertent gaps inside the case as described below). If the default gap is 1" (25mm) then the maximum voltage the gun generate with sharp points on the electrodes is about 25KV, and ~75KV if the gap uses very large radius electrodes ("large" being several inches in radius).

A better way to judge the suitability of a particular stun gun is to look closely at the case and see if it can be opened. Many stun gun cases are glued closed and opening them is likely to damage the case and the circuitry. If you can find a stun gun with screws holding the case closed then it is much more likely that you can repair or modify it. Converting a stun gun with an easily opened case to remote control is fairly easy.

Stun guns are available from a variety of sources. In some locations, depending on the local laws, gun stores and outdoorsman stores carry stun guns. In addition, there are several online sources of stun guns. Ebay usually has at least a couple dozen listings for stun guns. If you use Ebay beware that many sellers will list their stun guns at a very low price ($5 or less) then hit you with a $15 "shipping and handling" fee. A reasonable Ebay price for a generic stun gun should not exceed $20 total, with a little work they can sometime be obtained for $10 total.

Stun guns are a relatively cheap and usually reliable ignition sources, but they are not constructed to be operated for more than a few seconds at the time. Operating a stun gun for more than a couple of seconds can overheat and fry it. Most often it is the main switching transistor that gets fried, it can usually be replaced with any transistor of similar or higher ratings. Stun guns appear to fail about as often as piezo electric (BBQ) sparkers, which is to say, some will last forever, a few will die after only a few uses. 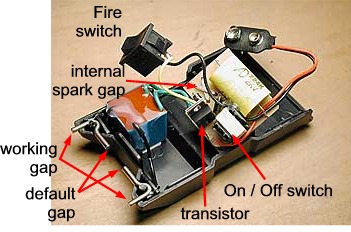 Another common failure mode, besides frying of the main transistor, is the development of an internal arc in the stun gun. The high voltage will always jump the smallest gap it can find. Sometimes this gap is, incorrectly, inside the case of the stungun. If the spark is jumping inside the stungun case then there is no voltage available to jump the external gap(s). Note that a normally operating stun gun sometimes has two spark gaps that both must spark, the visible external spark gap (which is usually two gaps; the default gap and the working gap) and another gap located inside the case. The internal gap is part of the high voltage generating circuitry. Usually, this internal gap is simply two strips of flat metal that cross each other in an X pattern. These two pieces of metal are designed to arc at a fairly "low" voltage (probably a few hundred volts) and supply the switching between the two stages of voltage amplification that most stun guns use.

If your stun gun quits working it may not be completely dead. If the gun still makes a ticking sound and/or a high-pitched whine, then it may have developed an internal arc. Try using a piece of wire to shorten the working gap and see if the smaller gap will spark. If you can get the external gap to be smaller than the internal (incorrect) gap then the stun gun may still be usable. If you purchased a stun gun with an easily opened case you can usually locate the incorrect internal arc and coat it with silicon caulk. Do not confuse the incorrect arc with the normal internal spark gap that the gun may contain.

Stun guns are illegal in many countries, and in some places in the U.S. In these places, alternate ignition sources may be required. The design of a camera flash plus ignition coil ignition is very similar to that of a stun gun though this setup will create only one spark after which it must be allowed to recharge for several seconds. The camera flash + ignition coil setup will usually give sparks that are much longer, and considerably more powerful, than even a "300KV" stun gun.

Tasers and cattle prods also contain similar high voltage sources, but are less well suited as ignition sources. Tasers are expensive and have a lot of superfluous components, cattle prods have a lower voltage and can only drive small spark gaps.