CS wrote:Thanks for the links. Talk about a exponentially growing rabbit hole of mind f*ck. I'm running out of room for tabs.

The big question I haven't figured out, what negative happens if the cg and cp are to far apart?

You would get an extremely stable projectile

Also a badminton like structure on the back of a projectile would move its cp back?

Yes. An easy way of finding the centre of pressure is to make a cardboard cutout of the profile of the object in question, and see where it balances.


Sure, I may have said it in my own layman terms though. However how much flight time are willing to sacrifice for your projectile to spend yawing, before correcting itself? The amount of drag and lift will effect how fast the projectile corrects itself. Firstly amplified by the distance between the cd and cp.

Practically, gluing a shotgun wad in reverse might do the trick.

Ideally I would want a greater separation of CP and CG but the fact that the fins need to survive firing means that I couldn't make them too light.

I solved this to some extent with the split sabot design that pulled the projectile along by the threads on the body as opposed to pushing on the fins.

Jsr, I like how your rounds perform but I think that it may be more beneficial to the round if you make the fins more tear drop shaped. Also that spin fin one you gave to tafloerous was probably to much spin,

it needed a slow like 1 turn per 19 inches thing to work at super sonic speeds, I also wonder if you make the point or head wider, and the shaft much thinner would that help, I am thinking of the blunt darts from cold steel blowguns
when life gives you lemons... make root beer and leave the world wondering how you did that

dart guy wrote:Jar, I like how your rounds perform but I think that it may be more beneficial to the round if you make the fins more tear drop shaped.

These aren't long range projectiles, so the strength of the fins is probably more important than their ballistic coefficient. (In any case, most of the drag on fins is often friction drag rather than pressure drag).

But, even were it an improvement to the performance of the projectile, it sounds like a considerably more tedious machining job.
Does that thing kinda look like a big cat to you?
Top

as a smart person once said, injection molding is the cheapest way.

(couldn't find the tread with the quote for that) i bet if jsr could make a mold then he could mass produce a reliable design.
when life gives you lemons... make root beer and leave the world wondering how you did that

This project is ongoing, here is the latest batch which should reach Taofledermaus shortly:

Since sabot separation seems to be a major issue with previous darts, these use bore-riding fins which mostly start at or ahead of the center of gravity, which should result in stability in the barrel, keeping the darts intact without the need for a sabot.

These supporting fins follow the same profile as the rear fins so they do not add to the frontal area, so there should not be a significant increase in drag. Also, without the extra sabot weight, the darts should accelerate to a higher muzzle velocity, and velocity is key for penetration.

Also in contrast to previous darts, the fins are cast from tooling resin instead of being machined from Delrin or aluminium. This material is semi-rigid meaning it is less brittle and more impact resistant, and it's also easier to make than having to machine each round.

Tool steel is used for all the cores, using mild steel for some past prototypes has resulted in poor penetration even from solid hits, and on the other end of the spectrum tungsten carbide is too expensive and also quite brittle. This makes hardened steel a good compromise. Some of the cores are made from drill bit shafts, others from HSS rod blanks ground to a point.

The bore-riding sabotless idea was already tested by Demolition Ranch here and they seemed to do pretty well in terms of flying nose first. Unfortunately DR doesn’t use high speed cameras so it’s difficult to evaluate the actual path of the projectile, but I have high hopes for this latest batch.

HSS seems to be pretty good, given the results of the sharpened thread taps I sent you.. When I have a working hybrid again i'm going to do some testing with sharpened tungsten rods.
Top

Labtecpower wrote:HSS seems to be pretty good, given the results of the sharpened thread taps I sent you.

Yeah, and thanks for the tip on how to sharpen them, credit to you

How did you make the mould for these projectiles?
Top

There are two, you can see them in the video.

One is a machined negative, basically a cup with the inner diameter the same as the barrel it's intended for, and inside that a tube with OD same as a cup ID, and ID which is the projectile body. In this tube slots are cut which become the fins.

The other one is simply made by pouring silicone rubber around a "master" projectile which I machined.

I have some broken M10 and M12 taps lying around, might turn them into saboted rounds

Finally got round to installing Solidworks since changing computers, made a model of a typical dart from the last batch: 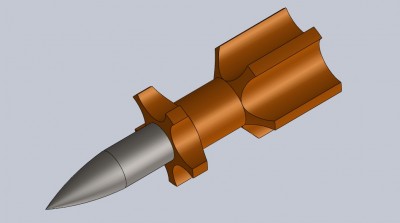 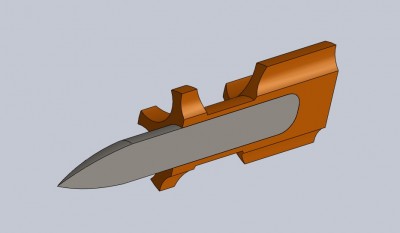 You know, if you're bound and determined to never learn how to use ANSYS, you could use Solidworks' built in FEA to do a stress analysis of the darts. Find the maximum acceleration of the dart in the barrel, then model the dart upright (nose pointing up) under gravity equivalent to that acceleration, with the base being supported by the appropriate pressure and the (small) difference being taken up by weak springs (technical term, look it up). You'll want to do this as a 2-D axially symmetric simulation, which will reduce the computational requirements while conveniently doing away with the other unnecessary degrees of freedom.

Are those aluminum sabots with HSS penetrators? How did you get that profile on the bottom of the hole? Endmill with a large corner radius?
Spudfiles' resident expert on all things that sail through the air at improbable speeds, trailing an incandescent wake of ionized air, dissociated polymers and metal oxides.
Top

I just thought about this, and it may seem a bit strange, but what about a fine powder/liquid retainer? Like have it pressed in between the fins to take up space? Would that do anything? I'm thinking that suspending part of it in a moveable piece would make it stay nicely in a shot gun wad, so that when the wad reaches the air the powder or liquid would spread the shot gun wad at a quicker pace and maybe out do the special sabots you are making. Just a thought, because what hasn't been thought of, may just be right. Or another thought, have you ever heared of power belt muzzle loader bullets? They expand to meet the barrel, kinda the concept I just suggested, but also it could be used like a shock absorber that prevents the fins from receiving the direct force of impacts, maybe with sides or hard sabot. What are the properties of ldpe? Because if you do a two part load, made inverse of how a katana is made (hard outside, soft inside) or the normal way, if the hdpe and ldpe are both used they could create a more resilient projectile.
when life gives you lemons... make root beer and leave the world wondering how you did that