Here is my other combustion cannon, mainly for bird scaring.
I have had this shooting 25 mm steel balls at 240 m/s 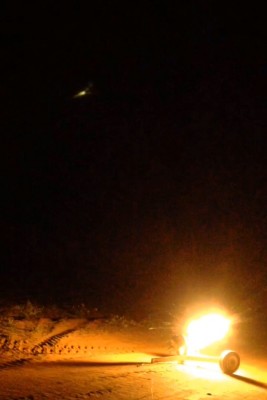 also that muzzle flash is really cool. do you have some damage pictures? it would be nice to see some carnage, bet you could launch a frozen spud at supersonic speeds.

I read in your other post that you are using KOH as electrolyte in your cell but that bright orange muzzle flash makes me think you could had been sold NaOH instead.
Top

Yeah it will almost go through 3/4 inch ply wood
I wouldn't like it aimed at me. 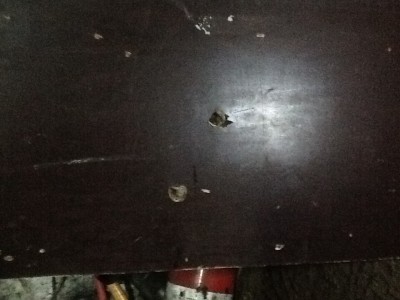 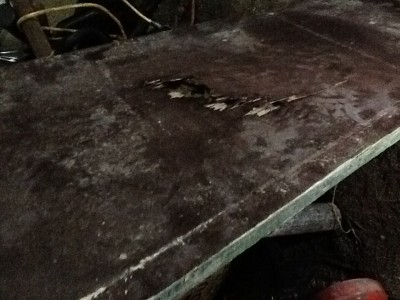 Almost made it through

Here she is
The chamber is a lpg bottle (holds about 6 liter)
I let it off one day for an adrenaline hit, the sun had just gone down and the air was quite moist ( you know how sound travels further), anyway you could hear the shockwave traveling up the paddock for about 5-10 second. The sound was unreal !! 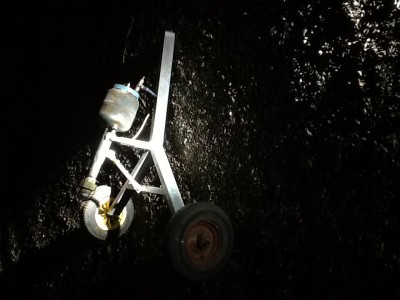 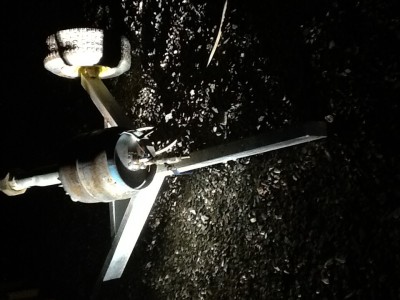 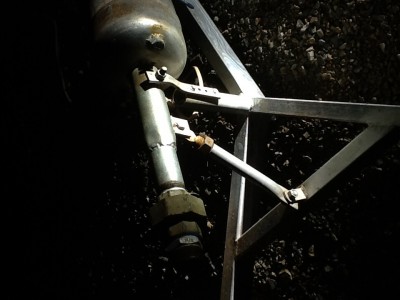 Nice! Im sure the sound is really awesome, have you tied using a muzzle brake just for looks? once i tried to do an oxy-hydrogen spudgun with a 600ml soda bottle just for fun, i used a 1/2 PVC pipe as barrel and it shooted airsof bbs like a shotgun, i never measured the speed but it did good dents in soup cans, knowing what would happen and it happened it blew up close to my arm and it hurt like a b!7ch, the only thing i tried after that was to make a bb gun with a copper pipe and it shoot a little faster than a kid's bb gun, it will go thorough a soup can.

I'm curious to know how you measured the speed, just like DYI said its tricky to measure the speed without the muzzle flash interfering with the chronograph, i don't have the problem of EMP due the slowness of my capacitors, still i think i almost figured out how to do it but i need some space were people isn't walking in all the time

Shooting big bearings at plywood reminds me of this, i want to practice slinging but i don't have space were to do it, i always underestimated the power of a sling until i saw this guy.
[youtube][/youtube]
Top

Hi,
That video is awesome, I never thought the simple slingshot was so powerful.
For measuring the speed I used a Go Pro hero 3 black, on wvga resolution (240 fps).
The length scale was a length of 4 inch PVC pipe with tape 1 meter apart, then I just counted the frames to travel 1 meter.
The ball bearing traveled 1 meter in one frame, thats how I worked it out.

Let me know if thats not clear enough.
water was made to burn
Top
Post Reply
6 posts • Page 1 of 1