This is my weed sprayer cannon! The most noticeable feature is that the chamber is made from a 1 gal. garden sprayer which is made from a thick polyethylene plastic. The threads on the tank were very different from 2" NPT but I cast them into the correct thread size using a steel 2" pipe nipple, blowtorch, and muscle. I poured some polyester casting resin (The brown stuff) into the mate between the tank and ABS adapter to give it extra mechanical support, not to seal it off. The threads work quite well. If you have specific questions about this part, please ask!

The cannon is fueled using a propane torch nozzle which uses the Venturi effect to mix the air and fuel in the correct ratio. The fuel/air mixture is piped through a siphon tube to the back end of the chamber so that when you turn on the propane, it pushes the exhaust gas out the barrel automatically. It takes about 1 minute to charge the cannon, hence the egg timer super-glued to the barrel support.

The barrel is made of aluminum and fits golf balls. It is a sliding breech that is tightened down by the ABS adapter at the front. The combustion gases are somewhat sealed off by the 2" coupling that slides over the golf ball port in the sch 80 outer barrel. With this barrel set up, I can shoot potatoes and golf balls without a ramrod and refuel the cannon if it doesn't ignite.

The ignition system consists of two copper wire electrodes that meet in the center of the tank and are connected to a BBQ igniter. The electrodes are fastened through the 2" ABS adapter so that no holes in the weed sprayer tank are made. This is meant to maximize the strength of the tank. The electrodes are sealed with rubber washers on the inside.

Like my prototype of this cannon (cannon thread titled "Direct Fueling/Venting Concept"), the final product is very reliable and fires every time if the seconds are counted off right and the propane tank is not upside down. I have not tested with ammo yet, but I will tomorrow and hopefully get a video. I dry fired it with a rag and it is very loud and works after consecutive shots. The next evolution of this design is to increase the flow rate of the injection system so I don't have to wait a full minute. It is worth the wait though, because it packs a huge punch! 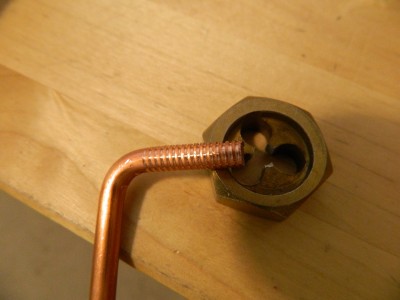 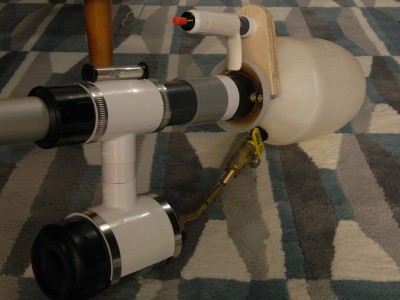 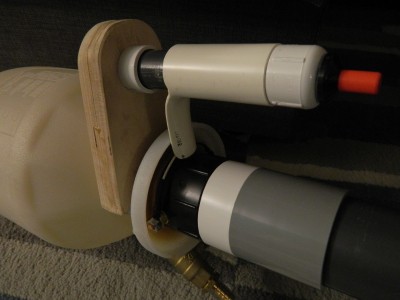 Looks well done! I would be surprised if you had any problems with that connection. Great work.

EDIT: any thoughts on a chamber fan?
I love you... *shank* *shank*
Top

Thanks Mark! I think a chamber fan would boost performance, but I think that the gas is mixed thoroughly enough by going through the nozzle and siphon tube. I feel that the convenience and simplicity is worth the slight decrease in performance.
****
UPDATE!

This fueling design does not effective exhaust the gases every time so I can only get off 3 shots before there is too much exhaust gas in the chamber for it to ignite. Also! I hydrotested the garden sprayer chamber. I pumped it to 100 psi and held it there for 2 minutes. After 1 minute it began to slowly creep causing a longitudinal seam. Don't use these weed sprayer tanks as pneumatic chambers!!! 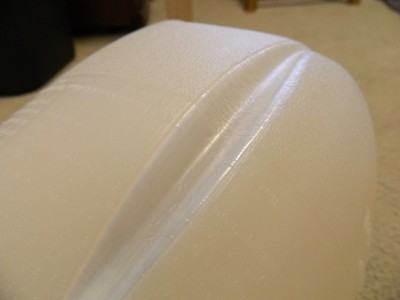 So when's the next installment?The chamber seems well suited to combustion use,the idea of a chamber fan for exhausting does seem feasible in fact necessary!

Maybe adding one inline with the intake fueling charge that blows through to remove the spent gasses,thus using only the two holes for the fueling and barrel.

The next installment is TBD and will be a completely new cannon! I decided to scrap Chappy since it doesn't work reliably due to insufficient venting and I don't want to just end up making a regular old advanced combustion cannon. Plus the tank is busted after the hydrotesting. My next cannon will be a very simple large ball valve pneumatic!
Top
Post Reply
5 posts • Page 1 of 1