Hi. I've been lurking for a bit and I've found most of what I need on the technical side so now I seek some opinions...

My son and I are making a Recon Armor costume from HALO3. He is going to be armed with a shotgun and a Magnum (and a Spartan Laser...). We are in the process of designing the Mag and the shotty.

I want to make both of the prop guns to have blowback. I originally explored solenoids but I couldn't find one that didn't feel wimpy when it actioned.

He and I were out back shooting cans with some of our CO2 guns and I realized that that might be just what we needed. One thing led to another and here I am at your forums.

So, I want to incorporate a blowback design into each weapon. The main things I'm looking for are a loud sound and real recoil. I do not need them to fire anything and, in fact, I'd rather not have it so that my son can figure out how to fire anything out of them (yet!).

I've attached a picture of the outline of the Magnum. I figure that whatever I put in the Mag will work in the shotty as well. For reference, the mag is about 10" long and a little over 1" wide at slide. I know that there is room in the grip for a 12oz CO2 cylinder.

So, with the above information, what would you guys recommend as the best way for me to get BANG and blowback? I am truly open to any and all ideas.

Oh, and for whatever it's worth, I have access to a pretty decent shop and have quite a bit of woodworking and design experience. So don't be shy when it comes to complexity.

Thanks! And I will definitely post a good writeup for everything I do on these. 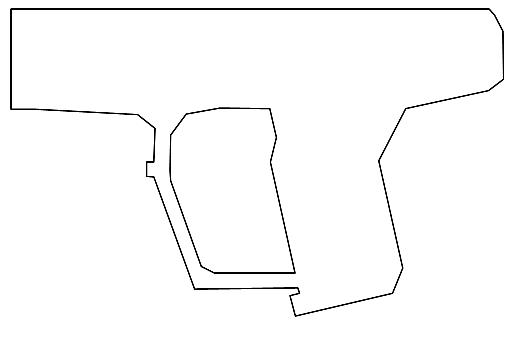 Hammer valve, do a search on them it may just be what your looking for.

Welcome to Spudfiles.
Look if you must.
Top

This might help you. Was bored and I remembered that some dude made a blowback thing I was meant to work on but it was too complicated with the current materials i had. Hope this helps.
It's Nerf or Nothing.

Don't start crying when I play this as my hobby, Paintball, Airsoft and Nerf are equally good hobbies, except you can play Nerf in public. Good day! Hmph!
Top

High pressure and a hammer valved blowback. If you have the bolt blowback, then port to the atmosphere, it will be louder than with a barrel. It would also give an impressive action.

Without having to think of a barrel, something like this would be easy to pull off.

You basically want a hammer valve and a bolt that slides back (and opens to the atmosphere) then is pushed back forwards to strike the valve again.

Let me know if you need a diagram.

Ok, thanks for input folks.

This has given me a couple of ideas. I did an animation in powerpoint. What do you think?

I'll most likely fabricate most of it with brass and resin.

design looks good, be sure to post pictures of the gun, and videos of it firing when the gun is finished.
Top

Definitely. I'm going to see how much I can get done over the long weekend.

I think I'll do a mockup first. We've already got the body of the magnum done and I've seen enough here in the forums to know that it's a pretty bad idea to design the system around the gun. If there's a way to shoehorn this thing in to what we have already, that would be great but I'd much rather it work well.
Top

Design looks good so far but the proof is always in being able to execute it.

Are you planning on having the gun's slide actually slide with the bolt/CO2 mechanism. That would be cool but probably adds too much complexity.

The whole point is actually to get the slide to actuate.... so fingers crossed on that.
Top

A much simpler, easier and more reliable(not to mention overall quality) idea would be to take a inexpensive plastic gas blow back airsoft pistol and essentiall dress it up to look like a magnum. Some type of hard foam+epoxy coating? Paper-mach'e?
Current project: Afghanistan deployment
Top

frankrede wrote:A much simpler, easier and more reliable(not to mention overall quality) idea would be to take a inexpensive plastic gas blow back airsoft pistol and essentiall dress it up to look like a magnum.

I concur, dirt cheap on ebay and you still have the "homebuilt" element of having to cut it up and fit in the shell you need,
Top

I agree 100% and that is an option that we considered. But, part of the costume rules of the competition my son hopes to enter is that all costume parts and accessories must be at least 90% handmade.

Besides, we're both really exciting about learning new stuff.

I am traveling right now but we did get some of the parts cut out of brass tubing before we left. I took pictures and will update when we return.

Again, thanks for the continued advice guys.
Top

I have shot my hammer and QEV valved " old shatterhand" with the breech unlocked.

It pops back pretty loud, so it's definately doable, especially if you plug the barrel.

Place the hammer in the path of the slide and it will repeat itself..
Gun Freak wrote:
Oh my friggin god stop being so awesome, that thing is pure kick ass. Most innovative and creative pneumatic that the files have ever come by!

Perhaps this would be of any help?
http://www.airsoftgi.com/product_info.p ... ts_id=1749
Current project: Afghanistan deployment
Top

this design is something I drew up. when the valve is opened, the pressure pushes the outer pipe(and the part of the gun for blowback) back, until the equalization hole passes the o-ring, at which point the pressure releases and the spring pulls it back. 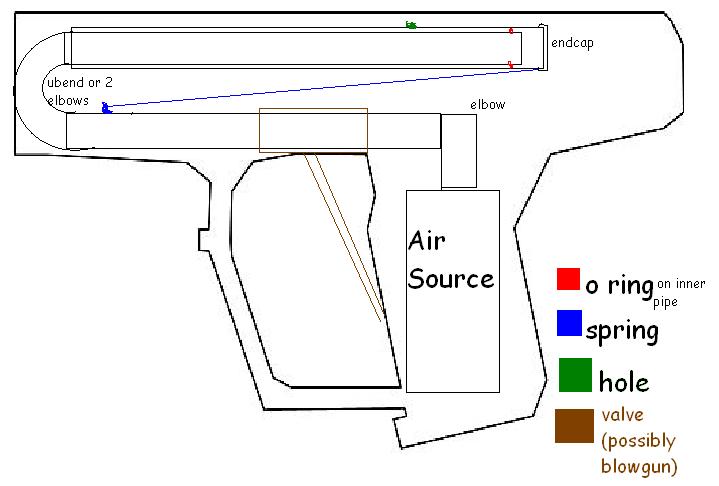