What about a weak electromagnet attached to one side of a tube that rotates around the barrel, sorta like my original design?
Top

That would do nothing, would be far better to spin up the projectile before firing it instead of that.

Aside from anything else you'd still need a special squirrel cage type projectile as you would for an AC spun projectile otherwise there is no torque put on the projectile, merely a minor and static (despite the coil being spun) magnetic field.

The coil as you showed it would create a magnetic field going through the projectile from tip to tail, rotating the coil would not cause the projectile to move at all.

Occurs that you wouldn't need AC to cause a rotating field by the way. Bursts of DC to a spiral of coils along the barrel would work too. More than 3 stages though.
Copperhead Prime: 14mm 240psi Bullpup Cannon
Copperhead Pocket Launcher: Ultra Compact Rocket Launcher
How To: Make a Stungun with a Disposable Flash Camera
Top

strangers wrote:I don't have the tools to make a hollow tailed projectile sadly, or really anything. I have a dremel and a drill to make things with, plus being convoluded is fun. But if I could make them I would.

You just need to get more creative.

A hollow-tailed projectile doesn't have to made out of a single piece of metal. You don't need a lathe, or drill press or ...

Find a straw with about the same ID as the nail's OD. Glue a short length of the straw on the butt of the nail. You now have a hollow tail projectile.

geardog32 wrote:rag, are you saying that the permanent magnets on the projectile will interfere with the accelerator coils?

No. Imagine you're making a magnet with another one - you pass it over whatever you're trying to magnetise repeatedly...

What do you think will happen when you fire numerous magnetised projectiles past the barrel magnets? They'll get remagnetised to uselessness.

so it will work for a while until the magnets become re magnetized and useless.

and i like the idea of spinning the projectile before firing.
(\ /)
(0.o)
(><) Copy the bunny to your sig and help him achieve world domination.
Top

geardog32 wrote:so it will work for a while until the magnets become re magnetized and useless.

I said nothing of the kind. I highly doubt that it will work, but I can tell you it will stop working.


and i like the idea of spinning the projectile before firing.

If you want to try and spin a projectile to those speeds before firing, be my guest.
Does that thing kinda look like a big cat to you?
Top

I have been able to spin the projectile, I plan on implementing it in a three stage half bridge coilgun.

How about spinning the barrel instead of the coil, that way it has a physical affect on the projectile.
Top

jamie e wrote:How about spinning the barrel instead of the coil, that way it has a physical affect on the projectile.

Hmm would that work? If the projectile is round it might enhance the magnus effect.
Yeah, it's that important.
Top

jamie e wrote:How about spinning the barrel instead of the coil, that way it has a physical affect on the projectile.

Also, like I said - rifling spin rates are obscenely high. Spin rates of many tens or hundreds of thousands of rpm.

In other words, spinning the projectile, barrel, or coil up with a motor with a motor is not feasible.
Does that thing kinda look like a big cat to you?
Top 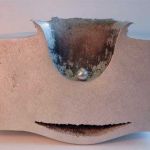 What about self rifling ammo.. if its possible

you'd think that the velocity of the ammo would be traveling way to fast and end up tearing the interal wall ""no"?
al-xg wrote:
I've used various things like cutting oil, silicone lubricant, even butter

jsr wrote:
This collection of containers on your bedside table must look very intimidating to any visiting young ladies

FORE!!!! wrote:You think that the velocity of the ammo would be travelling way to fast and end up tearing the internal wall

The magnetic fields in the coils can support the projectile without any need for it to touch the barrel walls. If it's touching the barrel walls, it's therefore suffering friction it doesn't need to.

So, if it's touching the walls, you're "doing it wrong" as they say.
Does that thing kinda look like a big cat to you?
Top

A non-magnetic tail either hollow, low mass or finned is by far the simplest way.

Because of the way the ammo is fed anything attached to it would make it too long, and I cant do anything else.

But, i just looked some rpm rates for various bullets and twist rates, yeah they are in the hundred thousands to stabilize just .22's. So yeah, things dont look good for my idea, unless I had a 50-stage coilgun or something shooting at more than 1000 fps, spin stabilization in the barrel wont work.
Top

strangers wrote:So yeah, things dont look good for my idea, unless I had a 50-stage coilgun or something shooting at more than 1000 fps, spin stabilization in the barrel wont work.

Actually, spin rates are less with lower velocities. However, they're higher with lower projectile densities.
With steel being about a third less dense than lead, spin rates increase by ~21%

In some cases, you can cut back on this spin rate - but it depends on the projectile. In some cases, it's even wise to.
So, the actual spin rates are less of a problem at lower velocities. I doubt you're looking at the kind of speeds my design is aiming for, so your problem is less than mine.
Does that thing kinda look like a big cat to you?
Top
Post Reply
38 posts