- the fact that your full auto marble gun, arguably the first QEV+popoff launcher on the forum and certainly the first I had ever seen, isn't featured

Guess I could add that. It's all kluged into the ZIP file at the bottom of the page but I guess it does deserve a page.

Guess I could work on the logo, as it is a little large in file size.


Fnord wrote:Layout is good and it's easy to navigate, you just need to keep adding content. Actual "features" like a google search box can be added later as the need arises.

I've never much been a fan of the bloated displays and source code that most "modern" sites use nowadays, so it's nice to see yours is fairly neat.

Even now that I have broadband access, I still do stuff like compressing images to reasonable sizes. Broadband is supposed to be useful for downloading music, videos and large applications, not giving web developers an excuse to re-invent the wheel with shiny crap that adds little to the site functionality.

oh, and I agree with JSR, the logo is a little annoying. Not much, but it could be a bit more subtle.

The styling and source is a little more bloated than I'd like, but transparency and rounded corners are hard to do minimally at least until more browsers start supporting CSS3. For now it uses a grand total of 2.3 KB (:D) of imagery to achieve the desired effect.

Content is coming. I plan on doing a tutorial or two now that my tax return is in (plus to make a couple of plinkers to have around) and I need to finish the fuel metering page. I guess a search box would come after I have some more content...

Thanks for actually giving some suggestions. I asked for them on two other forums and nobody even bothered.

I frgot to ask what you would fancy up on the barrel support?

Barrel has to be detachable, because I want to be able to take it with me on my bicycle.

It's also meant to reduce barrel flex, because 2 m of 50 mm PVC hangs down quite a bit.
Top

I'm going to have a visitor later this week.

Which spudgun will you be using

I want to see some modded celebs. (or other well-known people)

I'll kick off, with Ivan Skobrev

Maybe it is a good idea to do a "before and after" pic?

I'm looking forward to see some of other members!
Top

Be careful where you park! 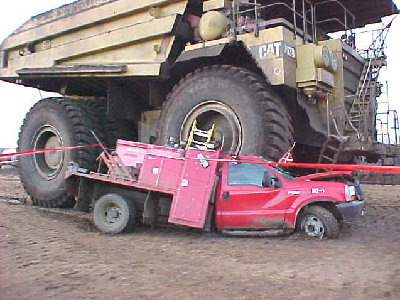 Liberalism is a mental disorder, reality is it's cure.
Top


ps: does spudfiles come in HD?


edit: this one is good to

how do i make the vid come up like jsr allways does?
'' To alcohol... The cause of, and solution to, all of life's problems.”
--Homer Simpson

You could also have used google instead

Women love diamonds for their wide range of industrial applications

I wonder what job the figure at the first desk has, being apparently tasked with hitting the Ctrl key very hard in a constant "1, 2, 3, pause, 1, 2, 3, pause" cycle.

Mind you, one of the turrets is at the second desk in the second row.
I can see problems when people hang up on it during phone calls: "Are you still there?"
Does that thing kinda look like a big cat to you?
Top

The President just left our auditorium. He got a fab tour before the speech.

Our CEO has been asked to advise him on job creation. This could be interesting as Paul has been critical of some of his policy.

It was a good day to have off.

Michelle Obama visited Slidell when I was still working for Public Operations. I called in sick the day she visited (:roll:) but the day before (talk about last minute) I got some sweet overtime cutting and edging every blade of grass in Old Town.

He even got the privilage to visit our SEM lab. Very few people get to visit here. I don't work on that particular SEM, but I have been by it several times.