While the title might suggest results, this is actually an appeal for those who have better facilities than I can afford.

After seeing this failure, a though came to mind - wouldn't it be great if we could qualify the sort of damage that one could expect when a PVC chamber under pressure ruptures?

I live in an urban area with restricted space so I have no way of doing this safely and discreetly, but I'm sure there are those on the forum who could, if one were so inclined.

The idea would be to have a chamber built of DWV pipe and fittings, connected remotely to a pressure source. This chamber would then be surrounded by 4 cardboard rectangles of increasing size that would not only track the path of the fragments but also give an idea of penetration. In the event that some fragments escape through all four layers, the test could be repeated with an inner thin plywood screen.

Since the size (and consquently velocity) and distribution of the fragments would be more or less random, the test would have to be repeated several times for a valid result. This wouldn't necessarily require new screens to be built, but any damage from the previous tests should be individually marked.

Just and idea for those who have the time and resources, that would help us better understand the dangers involved and perhaps drive home the point that one should always use appropriated materials for the job at hand. 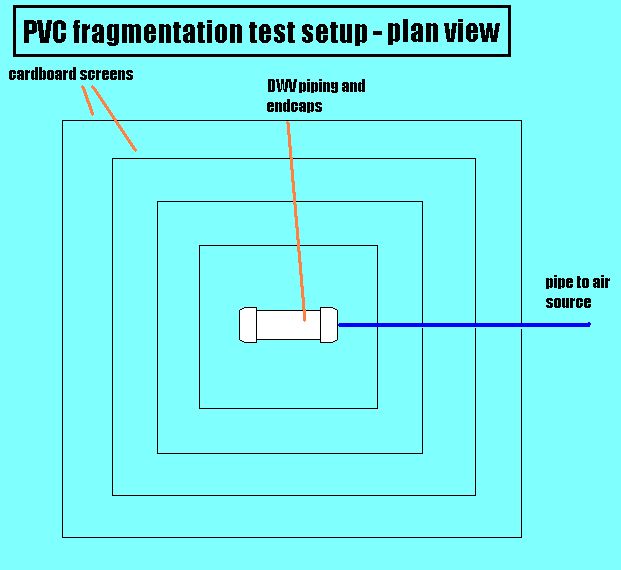 Sounds like a good idea, I would try it but I'm to lazy ATM to do anything.
In epoxy we trust.
Top

Is there a size limit to the pipe used? Also, does it have to be DWV (I know for safety purposes, this is what would be preferred) but what about pressure rated pipe bursting? Maybe someone can make multiple "bombs" of different sizes and pressure ratings.

Unfortunately, I do not have a compressor that is capable of such, and my bulk CO2 is empty, or else I would be glad to do it, seeing as how I have an "explosive instinct" (can't discuss, forum rules).
Hubb Library
FreePaintballPlans.com
Top

If I had a high pressure source, I'd do it. I live in the woods and have enough empty land nearby, and I also have a decent supply of ABS DWV pipe and fittings (though no PVC stock on hand). My air compressor will only hit 125psi. No CO2/HPA setup, and I'm not about to attempt to find DWV's burst pressure with a stirrup/shock pump.

I'd love to help if I can. Data from such tests would be very valuable to the spudgun community.

Another thought occurred to me:

Incorporate Spudblaster's ballistics gel, since it is being used to test the grenade effect.
Hubb Library
FreePaintballPlans.com
Top

Also, does it have to be DWV (I know for safety purposes, this is what would be preferred) but what about pressure rated pipe bursting?

I suggested DWV because few of us have the facilities to take pressure rated PVC to its actual burst pressure, which is usually significantly higher than the rated pressure. With DWV it would probably be reasonable (though tedious) to burst it with a stirrup pump - I don't suppose a 12" long 4" diameter DWV chamber would last for long over 100psi, probably less.


hubb017 wrote:Incorporate Spudblaster's ballistics gel, since it is being used to test the grenade effect.

What you could do is first see how many layers of cardboard a PVC fragment from the exploding chamber would penetrate. Take the same fragment and load it with a sabot in a pneumatic cannon, and alter the pressure until it penetrates the same number of layers as it did in the fragmentation test. You can then fire it at ballistics gel using the same pressure.

With a controlled CO2 / HPA setup, it shouldn't be too difficult to take either one to its limit.

I have a game coming up, which will require me to fill my bulk tank. If time and money permits, I'll try it. My wife just "loves" it when I make things go boom

If it blows under 150psi, and the first screen is over 20cm away, I doubt it will go through at all. I've had two PVC explosions happen when I was right next to the thing, one piece hit me in the face, I hardly felt it.
Check out my YouTube SpudGun Channel!
Top

hubb017 wrote:If time and money permits, I'll try it. My wife just "loves" it when I make things go boom

That would be great

If it blows under 150psi, and the first screen is over 20cm away, I doubt it will go through at all. I've had two PVC explosions happen when I was right next to the thing, one piece hit me in the face, I hardly felt it.

I predict similar results at typical spudgun pressures - this experiment is more of a "mythbusters" style venture, in the sense that while everyone fears razor sharp PVC shards ricocheting about, we have no real way of saying how dangerous those fragments actually are.

I'm not saying "exploding PVC isn't as dangerous as you think, make your high pressure pneumatic launcher out of DWV" but at least we could put the scare stories into an empirically measured context.

Fair enough, if holding the gun as it explodes you would still risk cut hands, and possibly it could cut an artery in your arm or something.
Check out my YouTube SpudGun Channel!
Top

She looks at me funny when I "experiment" (again, can't touch that topic).

I do know, however, that a shockwave from a "pvc chamber" is enough to dig a small hole with (sch40, 2"). Now, for the record, this was not what one would consider a "conventional pipe bomb." It was a mix of certain chemicals that allowed the pressure in the pipe to slowly build (approximately 4 minutes worth) and causing it to rupture. The pipe ruptured at its peak, instead of building excessive pressure which is generated in a pipe bomb.

Of course this was before I found Spudfiles and the psi was not measured, nor was the fragmentation. I did note, however, that the pvc did shatter into fragments that I would have hated to dig out of my skin.

Maybe I could re-create this scenario, but have it in a more controlled environment to measure psi, fragmentation, destruction, etc.
Hubb Library
FreePaintballPlans.com
Top

That's the thing with PVC - fragments are unpredictable, and sometimes so sharp that it wouldn't take that much velocity to rupture an artery or an eyeball - it's mostly a matter of sheer luck.

I have another question. This test is simply testing the effects of PVC shrapnel after a pressure related explosion. Is there a possibility that the shrapnel will react differently when the pipe ruptures when a large shock is induced (i.e. dropped while pressurized).
"Never tell people how to do things. Tell them what to do and they will surprise you with their ingenuity." George S. Patton
Top

Did you all see the 2" sch40 pressure rate test that was posted before. It took 1,029 psi to bust the pipe, i beleave the pipe was 10' long. All it did was crack and blow water. If i remember correctly, it was BcPneumatics that posted that thread.
HEADPHONES ARE STILL REQUIRED
Top
Post Reply
65 posts