It's been a long time since I've posted or gone through the site. Been busy with the college search and finally making a decision but now that that's done i'm smooth sailing till I leave!

So I was planning on creating a pretty simple and basic Pneumatic Cannon that will be shooting Nerf Darts of some sort. I will have to decide what kind and buy them to get the diameter so I can decided on the size of the barrel. How do you usually determine the barrel diameter in comparison to the ammo diameter?

Also to clarify this cannon doesn't need to be very strong however I want it to have more power then a normal Nerf gun would which I don't think will be too hard to accomplish.

I'm probably thinking a straight line design. (Chamber - Valve - Barrel).
Although a U shape design maybe easier for the reason I will be traveling quite a bit with this cannon. Any pros or cons between the two?

To go with the traveling part, I need to factor in the actuation valve and fill valve. I'm hoping that a simple hand bike pump (Schrader) would be able to fill a chamber somewhat well. That way I wouldn't have to carry around an electric air pump. This means I would have a schrader fill valve. Will a hand pump still be able to get decent power behind it or not so much?

As for the actuation valve. I've used sprinkler valves before and I've also experimented with a cup valve however that didn't work for me. (Spent a lot of money on the cannon too.) A sprinkler valve for such a basic and simple cannon seems a little overkill but maybe my thinking is off here. I've used a ball valve before and I can see it looking nice in the design however the opening speed is quite slow. Maybe this is okay since I don't need very much power behind it. Never used a QEV valve but if people think it would work nicely or be the easiest I could try it.

And since this is a refresher for me I just want to make sure I have everything right. All pipe should be sch 40 pressure rated? Any other precautions I have forgot about?

I want to thank you guys in advance for any and all help! If you have any questions about what I'm thinking in the cannon just let me know and i'll let you know!

If the Nerf darts are 2"s then use 2" pipe for the barrel and a sabet or wading to get a good seal to launch the darts.

I would go for a very simple in line. Short fat chamber, sprinkler or QEV valve and barrel. A hand pump should be fine, just takes some pumping to fill it thats all.

P.S. Welcome back, haven't seen you in a long time.

Thanks for the quick reply jrrdw! Always ready to help as I remember!

Really have no idea on what an ideal chamber size or barrel length would be for this cannon. And size of QEV valve.

Any help with that?

Like I said I've never used a QEV valve before. I understand it's a T shape and it's pretty much a barrel sealing piston if i'm correct. So one end is connected to the chamber and the other is connected to the barrel. The bottom of the T is where the air is dumped. What are my choices to attach here? Blowgun work? Just screw it in?

Would you make the chamber accessible or with such a small cannon would you just seal it with the PVC cement or would you create a screw off end cap with the valve attached onto it?

I've done interchangeable barrels before however don't remember exactly how I did it. Any input here?

edit: Does Menards/Home Depot/Lowes sell QEV valves or would this be something I would have to order online?
Top

So your main ammo will be "nerf darts", they come in different sizes so what darts will you be using? Start there...

I smell a real time how to starting to happen

Since NERF darts need so little air per shot, you could probably realistically make a semi auto without the need for a high pressure air reservoir.

Fins included? If so, this is going to be a small cannon. JSR gave a good example using a QEV.
Look if you must.
Top

Yeah the widest part of the dart is 1/2 inch so it will be a small cannon. The semi auto idea is pretty cool but like I said I want the cannon to be portable so I don't know if this would work with just a hand pump?

Instead of a U Shape, i'd rather go with a short fat chamber as an in line style if that still works.

So I know i'll be buy 1/2 half inch pipe for the barrel but how long should it be? Any suggestions on chamber volume, length, and/or diameter?

And so if my barrel is 1/2 inch then will i just use fittings to go from the 1/2 inch size to the size of my QEV? Would a 1/4 QEV work well in this design?

And i'm trying to get going on this cannon. Anybody know of any stores where QEVs are sold?

Thanks for the help guys!

edit: Now looking at the cannon again I think I see what you mean by air reservoir. Is it the black/grey cylindrical object coming off the bottom of the T QEV? You fill that up and just screw it on? So I could essentially have 3 or 4 of those and just take one off and screw in the other? How much do they go for and how do they regulate the PSI?
Top

Here's how I would make it with limited tools and budget. Since Nerf darts are so light and only need a short burst of air, I would not bother with a secondary chamber - just block off the QEV "A" port and let the internal volume of the QEV act as this chamber.

Every time you manipulate the slide valve, the small amount of air in the QEV is released, firing the Nerf dart. At the same time, the main supply from the bottle is closed. When the slide valve is returned to the rest position, the QEV chamber refills and it is ready for the next shot.

Also, I drew a soda bottle as the main supply but it would be preferable to use a PVC chamber. 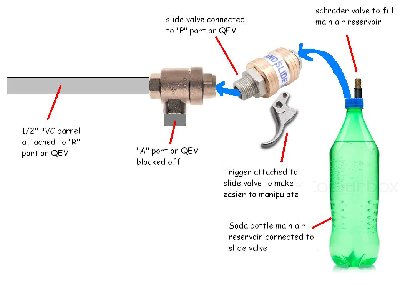 I understand it for the most part. So the chamber is esseguys lly the air reservoir which can be made out of PVC? The actuatiostores e will be a slide valve instead of a blow gun.

How is the pressure regulated though?

How big should the chamber/reservoir be? Or should i make multiple?

Still use a hand pump to fill the rreservoir or would a quick connect work better?

Where are slide valves and QEVs sold in stores?

edit: After calling probably around 10 or 15 near by hardware and plumbing stores I finally found one that has QEV and Slide Valves. Grainger carries them and their able to get them into a store near me within 2 or 3 days. Just need to decide on what sizes now.

Since NERF darts need so little air per shot, you could probably realistically make a semi auto without the need for a high pressure air reservoir.

Jack I've never used a slide valve, but the first link you introduced PVC Arsenal's gun, has a male quick connect on the back of a slide valve. I thought slide valves functioned as a tube which can let pressure out of it's side? Is there a hidden check valve between the quick connect and slide valve?? I'm intrigued!
Top

RBurke83 wrote:Is there a hidden check valve between the quick connect and slide valve?? I'm intrigued!

That looks more like a schrader to me to be honest. In any case, if there is no check valve there the launcher will simply empty as soon as you disconnect the air source.


How is the pressure regulated though?

There is no regulation, but because the firing chamber is so small in relation to the main chamber, power drop for a good number of shots should be negligible.


How big should the chamber/reservoir be? Or should i make multiple?

I would say around 2 litres is more than enough, not too big to get to decent pressure and not too bulky but enough for a good number of shots before it needs to be refilled.


Still use a hand pump to fill the rreservoir or would a quick connect work better?

Well if you have a compressor you'll work a lot less

I figured going with a 4 inch diameter and that would mean I would have to get around 10 inches to have a volume of 125 cubic inches. Does this seem right?

And I had talked about a schrader fill valve for the ease of portability but if I make two or three 125 cubic inch chambers I could fill them with an air compressor and just take them on the go with me. Does this seem reasonable or capable to do? If so do I go with a quick connect system?

What size QEV and Slide valve should I look for? Would 1/4 inch be enough power or should I go for a 1/2 inch?

I have no idea on barrel length either. Any suggestions or ways to figure this out?

Thanks a lot guys!
Top