Building or modifying BB, Airsoft, and Pellet type of guns. Show off your custom designs, find tips and other discussion. Target practice only!
Post Reply
230 posts

Here is my collection I have acquired

The FN P90 is a cheap piece of crap gun I traded from a friend and I threw on a custom paintjob for a more milsim look.

The AR is a Echo 1, shoots around 410 fps, adjustable stock and outer barrel extension(shown)

The AK is a unknown chinese brand. has decent internals and is entirely full metal(except the stock of course).
Current project: Afghanistan deployment
Top

got some new pics of some of my newer-ish guns

P90 with RIS unit and homemade phantom kit suppressor(it works).
There is also an eotech on it.

And just for fun and to be crazy.. threw on my 3-12x50 illuminated range finder scope that has 30mm tube instead of a 25mm tube.

somtimes people wear safety glasses but a ricochet can sneak up under the glasses. Full seal eye protection should really be used at all times.

It also happened a few weeks ago to a person on our field just using safety glasses.

Yeah, I used to use glasses but now I'll use a mask... Really only cuz I just bought paintball gear...

I usually just play with kids with cheap springers... So then I just use glasses...
Life's too short to mark off the items on your wish list...
Top

Is that a recoil pad on an airsoft gun?
Top

The l96 is a AGM l96, nothing great, performance is lacking.. but I picked it up for $10, did a nice coat of paint, and it works for a backup rifle in-case my other gun's batteries die


There is an extended rubber butpad on the p90. I do it because I find it more comfortable, get more grip and also reduces gearbox noise from traveling outwards.
RC-P240 P90 Vortex Cap
3 Barrel Grenade Launcher
Top

And the biggest waste of money ever, my tsd m700

Yeah, it's that important.
Top

These are the two decent airsoft guns I have, all the rest are crappy springers and aren't even worth posting.

The rifle is an AGM mp001. It was a fairly cheap gun but it performs very well. The manufacturer claims 380 fps, but I've chrono'd it at well over 400. The big ugly thing on the scope is a set of really bright LEDs that I added to the gun. Most of the time I play airsoft at night, so with the lights on I can see clearly through the scope out to about 200 feet. The switch for the lights is near the trigger, so I can turn them on, shoot, then turn them off before anyone really notices.

The pistol is an HFC m9 vertec. It's all metal and semi/full auto 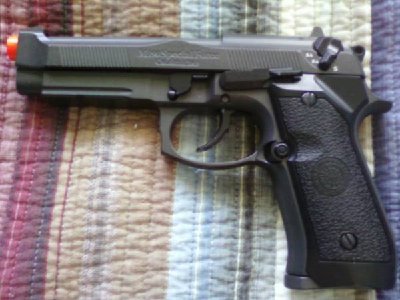 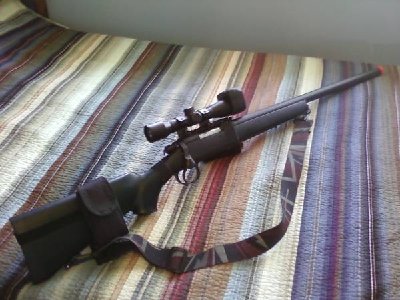 It's hard to soar with eagles when you're working with turkeys.
Top

Well, here is mine

Made by Garagefloor industry, all plastic and aluminium
Shoots 520 fps with a .43 (with a little recoil) and has no hop-up yet

(I guess it is the most powerful airsoft posted yet 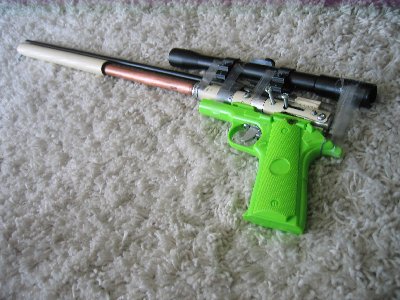 Well, here is mine.

Made by Ontario Kinetics, mostly brass and polycarbonate (also some aluminum, steel and SS where necessary).
Shoots ~4200 fps with a .12 (with a little bit more recoil) and has no hop-up yet (nor will it ever, as it's entirely immobile when connected to the capacitor and takes almost two hours to reload).

(I guess it's the most powerful airsoft gun posted here yet

okay guys, before this gets out of hand lol...

this thread is really only meant for Airsoft Gun purchases, not homemade stuff.. thats what the rest of the BBMG strafer showcase is for.. this single thread is the store purchased thread to show off your store purchased airsoft guns...


But yeah, your guy's guns are epic.

You just added that last line in the thread rules a few minutes ago, didn't you?

Spudfiles' resident expert on all things that sail through the air at improbable speeds, trailing an incandescent wake of ionized air, dissociated polymers and metal oxides.
Top

DYI does not care for the affairs of mere mortal airsofters. He plans to skirmish Balrogs with his BB guns.

DYI wrote:You just added that last line in the thread rules a few minutes ago, didn't you?

but there was also a post on the first page where we actually turned this thread into a thread for everone to post their purchased airsoft guns...

I just thought i would make it more clear by putting that up in the first post as well..

Davidvaini wrote:Actually.. I got an idea.. how about we make a thread to showcase all the airsoft guns we have baught or painted.. there are enough..