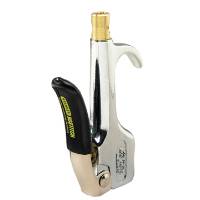 Blowguns are made for cleaning surfaces with compressed air, but since they have a comfortable grip and a built-in valve that is easily opened by hand, they're commonly used as pilot valves in pneumatic cannons.

Most blowguns come with a nozzle, and this should be removed since they (almost always) reduce flow further. Most blowguns will only work in one direction, and will leak if pressurized in reverse.

In BB machine guns, a blowgun can be used as the primary valve since these guns need less airflow.