In the world of devices that launch things at high velocity a chronograph is a device for measuring a projectile's velocity. This device is sometimes referred to as a "shooting chronograph".

There are many methods for measuring the speed of a projectile. They range from simply counting how long a round takes to hit the ground after being fired straight up (the "hang time" method) to sophisticated commercial devices that can measure velocities to an accuracy of less than 1% over a range of velocities from a few tens of feet per second (FPS) to several thousand FPS.

One method for estimating the muzzle velocity of a spud gun is to measure the hang time for a spud fired straight up. The "hang time" is the time from when the spud leaves the barrel until it hits the ground. If there is no air friction, then the speed at which the spud hits the ground is the same as the muzzle velocity. If air friction is neglected, the formula is based on the equation of motion in a uniform gravitational field;

Unfortunately, for a typical spud gun, air friction is significant and makes the simple calculation fail miserably. Hang time can be used to estimate the relative muzzle velocity of two guns firing the same ammo but it can not be used to calculate the actual muzzle velocity.

If the aerodynamic characteristics of the ammo are known then the hang time can be used to estimate the muzzle velocity, such as in the case of a tennis ball, whose Cd (Coefficient of Drag) has been experimentally determined to be about 0.6.

There are several commercially available chronograph suitable for use with spud guns. Perhaps the most common is the Chrony® F1, a product of Shooting Chrony Inc. The F1 sells at retail for $90 and they are frequently available used for a bit less.

The F1 uses optical detectors to detect the passage of the round and the velocity is shown on a digital display.

PC and Laptop Based Homemade Chronograph

Since most guns operate in the subsonic to supersonic range any device designed to work with audio signals will have suitable characteristics.

Most PCs and Laptops made in the last 15 years came equipped with a sound card. The sound card is an analog to digital (A/D) and digital to analog (D/A) converter. Sound cards are usually dual channel (left and right stereo channels), sample at up to 48,000 (48KHz) samples per second at 8 or 16 bits resolution per sample. Therefore, the typical sound card is a fairly powerful data acquisition system. It is possible to buy better data acquisition systems (i.e., laboratory grade equipment) but they are expensive. For our purposes, the sound card is more than adequate and readily available.

The simplest way to use the sound card as a chronometer is to just use a microphone to record the sound of the gun firing at a solid target. The audio recording will have a signal at the moment the projectile left the barrel and another when it strikes the target. If the microphone is positioned the same distance from the muzzle and the target then the average velocity of the round is simply the distance from the muzzle to the target divided by the flight time. If the target is reasonably close to the muzzle, within say a few feet, then the average velocity is essentially the same as the muzzle velocity.

There are a couple software packages that are of use in a PC audio based chronograph. Audacity is an excellent freeware sound recording, visualization and analysis package. Audacity can be used to both record the audio and measure the flight time.

SoftChrono is a freeware Windows application specifically designed for using a microphone plus soundcard as a shooting chronograph.

Sample photo showing Audacity at the cannon discharge. The pre fire hiss of the pilot is shown followed by the piston valve opening. The muzzle blast is the portion with a heavy negative shift due to the pressure front of the muzzle blast. 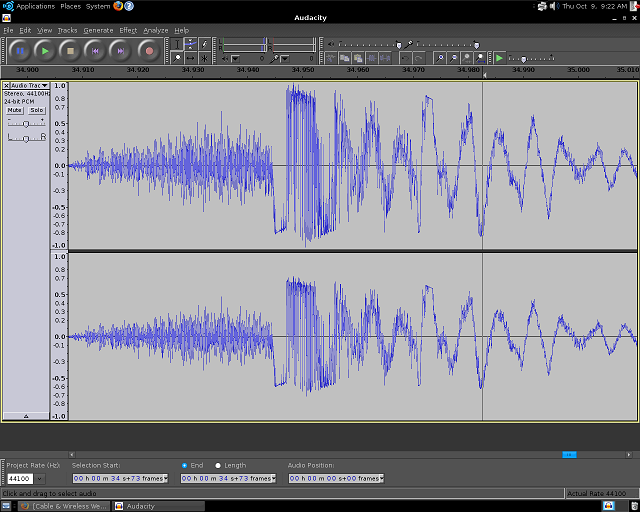 When using magnetic pick up coils and either a magnetic projectile by embedding a small magnet or detecting a ferris or non ferris projectile by detecting a disturbance in a static magnetic field, the time to cross between the two pick up coils can accurately measure a passing projectile's speed. This was used by a Spudfiles member with multiple pickup coils on a plastic barrel to measure the projectile acceleration and fall off of acceleration for the purpose of optimization of a barrel length for maximum launch velocity. The signal from the pick up coils can be fed to a sound card for measurements the same way it is done for the home made optical pickup.

An advantage of magnetic is immunity from wadding, sabots, and muzzle condensation or blast causing detection errors in an optical gate. Another advantage is the ablility to measure speed inside a barrel or measure valve motion to record valve opening times. Using more than 2 pickup coils provides the ability to measure changes in speed.

Disadvantages include complexity in eliminating radio frequency interference, magnetic pickup from motors, transformers, etc and setting the gain correctly to prevent clipping or distortion of the signal. Another disadvantage is the need to use either a magnet in the projectile or use a bias magnetic field and a conductive projectile. 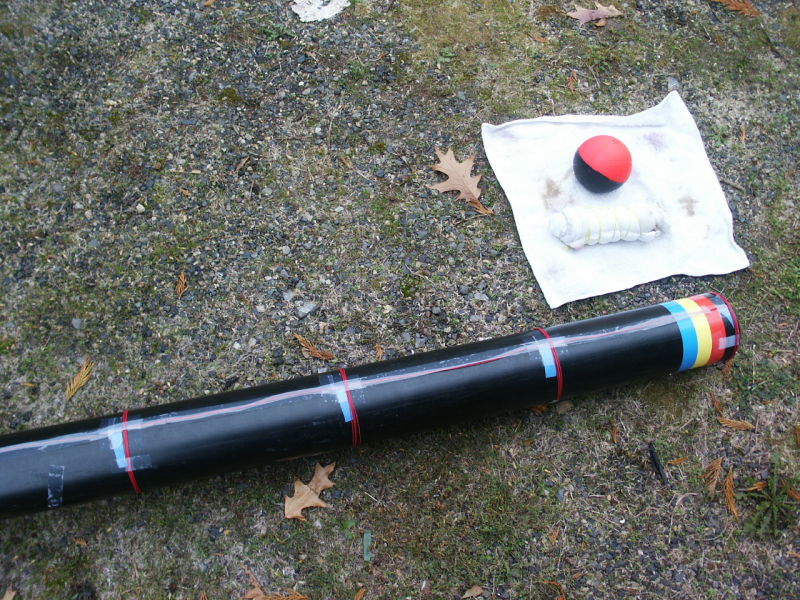 Pick up coils on a 4 inch barrel for testing. Magnets are embedded in the shirt and ball projectiles.

Optical Input to a Sound Card Based Chronograph

Recordings that are somewhat simpler to interpret can be made if the microphone is replaced with a pair of optical detectors such as phototransistors. This optical approach eliminates any possible confusion caused by echoes and gives a signal that is much easier to interpret.

For example, using the setup described here, the recording below was obtained for the firing of a BB machine gun;

Each pair of peaks represents a single BB passing over the two photo detector gates. The gates were three inches apart and the first gate an inch or two from the gun's muzzle. The velocity of each BB is calculated as the time between peaks (in seconds) divided by the distance between the two gates. Based on this recording, this particular BBMG is firing at about 330 FPS (the velocity varies from round to round) and with a rate of fire of ~4800 rounds per minute.

With the introduction of consumer grade high speed cameras, high speed video is now a reality. With a known camera frame rate and a reference for how far the projectile moved between frames the speed can be calculated with speed = distance/time.

A variation to high speed video is a high speed strobe. This must be done in the dark to prevent overexposure with the long camera shutter time.

This composite was assembled from consecutive frames of the high speed video. 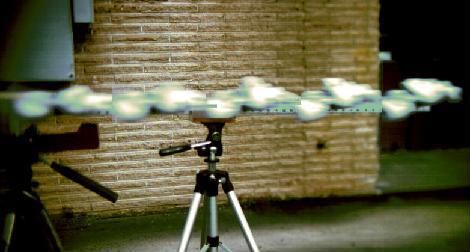