Pressure Rated PVC is a fairly common type of spudgun material that most spudguns are made from. It can be found at your local Lowes, Home Depot or Ace Hardware in America. If you are outside the US, you are more likely to find cheap PVC at a Plumbing Merchant, but it can also be found in Aus/NZ at a Bunnings or Masters.

Identifying the correct type of PVC to use in a Pneumatic or Hybrid cannon is vital because of the high pressures involved. Combustion cannons don't need to be made from pressure rated pipe in most cases, but if you don't mind the weight and cost, the additional safety provided by the pipe can only benefit your cannon.

Generally, most spudders who build combustion cannons will not use pressure rated PVC due to the relatively low pressure spike generated by most combustion cannons, and the cost and weight of pressure rated PVC. About 30-45 PSI is generated in hairspray fueled cannons and about 60-75 PSI in propane or MAPP powered cannons, which DWV (Non-Pressure Rated) PVC or ABS can typically withstand. However, wall thickness should be taken into account if the pipe is not rated.

There have been few reports of DWV PVC combustion cannons failing, but this is probably due to pipe fatigue, thin-wall PVC usage, or cracks formed from threaded fittings connected to the chamber.

Advanced Combustion cannons should be constructed with pressure rated pipes.

Pressure rated PVC is the most common pneumatic cannon material because of the reasonably low cost, availability, and relatively low weight. It also suits a pneumatic very well, having a wide range of different types of fittings and usually a high pressure rating, with a decent safety factor (3, in most cases).

DWV PVC has been exposed to around 80-120 PSI in a pneumatic, but this is definitely not recommended. DWV has no rating, meaning it could blow as low as 1 PSI.

Pressure rated PVC (Sch 80) was generally a common material in making hybrids until, by general concensus, it was deemed too dangerous after several cannon failures around 4-6x mixes.

If you plan on making a hybrid from PVC, NSF-PW Sch 80 PVC is the minimum requirement but it would be best to stay under 4x mixes.

Most hybrids are constructed from galvanized steel pipe, which is more expensive in larger sizes and weighs more, but the pressure rating is far higher.

If you are having problems separating Pressure Rated PVC components from DWV PVC, these few differences should make it crystal clear next time you go to a hardware store.

DWV PVC fittings have a few obvious traits that you can use to identify them. 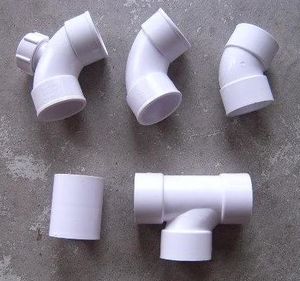 Pressure Rated PVC fittings generally have the opposite traits as DWV fittings. 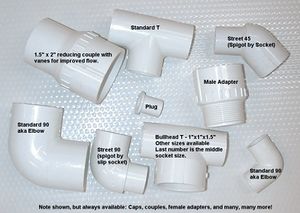 Common Misconception: Even though Bell Reducers look Pressure rated, in most cases they are not. It is best to stick to Reducing Bushings because they are usually pressure rated, make sure to check first though.

Tip: On a Pressure Rated fitting, the writing is usually raised and can be read once painted over. In the case of pipe, if enough layers of paint are on the pipe, you probably can't read the print, so make sure to write down what the pipe has written on it before you paint over it.

Note: The above is intended for identifying American fittings and pipe. To identify Australia/New Zealand fittings, see below.

To find out if a fitting is pressure rated, it should have 'NSF-PW' written in raised text, it may also have Sch 40 (or 80,120 etc) on it. Most American fittings don't have a pressure rating on them, but if they have NSF-PW ("PW" stands for Potable Water, which, by nature is under pressure), you're okay, it will be pressure rated.

XXXPSI, is the pressure rating, it changes depending on the 'schedule' rating and the diameter of the pipe. The pipe may also have a different temperature rating, but the most common say '@73F'.

If it doesn't have 'NSF-PW' or pressure rating, chances are it's DWV.

You can also identify Pressure Rated or DWV fittings and pipe by their 'AS' number written on them, but it's not essential to learn. More details about 'AS' numbers coming soon.

Since Aus/NZ use a different measuring system, PVC fittings and pipe have a different way of identifying if they are Pressure Rated or not.

To find out if a PVC fitting is Pressure Rated or not, it should have written on it in either raised or plain text, either:

To find the pressure rating of PVC pipe, use the same system as you did with the fittings. Find the PN or Class number. Try not to get confused with the 'DN' number, which is the nominal diameter in millimetres. E.g DN50 = Diameter 50mm.

As with the American system, there is another way to determine the pressure rating, and that is by AS/NZS number. More information to come soon.

European Pressure Rating System: In Europe the EN 1452-2 norm is used to classify pressure rated pipes, and they are identified with a PN (pressure number) code, which stands for the allowable pressure in Bar. The most common ratings are PN10 for pipes and PN16 for fittings, corresponding to 10 Bar (145 Psi) and 16 Bar (230 Psi), but up to PN25 is available.