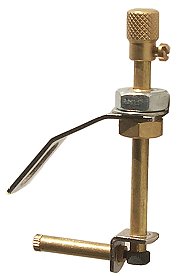 Lantern sparkers are a method of ignition and are usually cheaper and more arguably reliable than BBQ ignitors or stun guns. They work by spinning a knurled wheel connected to a rod of steel. A piece of flint pressed against a rifled section of the steel by a spring. When the wheel is spun rapidly, pieces of the flint material are shaved off and ignite spontaneously, causing a shower of sparks that are ideal for igniting a combustion mixture.

The main disadvantage of lantern sparkers is that they have the tendency to not spark when wet. AXE, hairspray, and starting fluid will all stop a lantern sparker from working if they get on the flint/steel sparking assembly.

A lantern sparker requires that one hand is used to operate the sparker. This only leaves one hand to hold the gun and absorb the gun's recoil. In practice, this makes firing a handheld gun somewhat unstable. For this reason, a gun mount is a good idea when using a lantern sparker on a large gun.

Lantern sparkers cannot be used on hybrid cannons, as they will leak.

It is generally considered to be a bad idea to mount the sparker in a cleanout plug. If the cleanout plug fails during firing, then the plug is blown directly into the hand that was operating the sparker. In addition, a loaded gun can fire accidentally if the gun is set down on the breech end (where the sparker is located).

Lantern sparkers can be triggered if they are struck inadvertently. For this reason it is best to mount the sparker in a protected place on the gun or to protect the sparker with a trigger guard.

They are very cheap, $2~$5, the flints are replaceable, and they are widely available in stores that carry camping supplies.

The lantern sparker is mounted through a single hole in the chamber (or though a fitting) and captured with the nut supplied with the sparker. The flint and striker wheel assembly protrudes into the chamber, and may therefore be impractical or impossible to use in coaxial launchers.