What is a Spudgun? 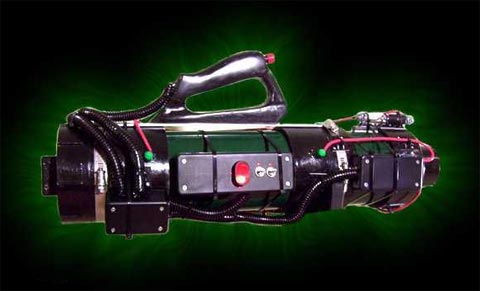 Main article: What is a spudgun?

There are many different names for spudguns. They are called potato cannons, spud launchers, potato guns, spud cannons, and a host of others. Whatever you decide to call it, all of the aforementioned describe the same type of device: a device used to accelerate a potato down the barrel, and shoot it some distance. While it may offend some purists, the humble little potato is quickly losing favor to other ammunitions such as golf balls, tennis balls, and other cheap, uniform projectiles.

A Pneumatic launcher uses the energy stored in compressed gas, most often times air that has been compressed by a bicycle pump or an air compressor. CO2 is also used semi-regularly, and compressed gases such as nitrogen and hydrogen have been used in the past. The air resides within the launcher's chamber, and is held back by a valve. When the valve is opened and the air is allowed to decompress, the ammunition is pushed in front of it down the barrel.

A Combustion launcher gets the energy it needs to launch a projectile from the combustion of volatile fuels that are added to the chamber prior to ignition. Traditionally, combustion launchers are fueled by an aerosol product that use flammable gases for pressurization. Automotive starting fluid, hairsprays and body sprays are popular traditional fuels. Propane, butane and other pure combustible gases are preferred in more advanced guns. The combustible gases are most commonly ignited by a BBQ igniter (flint, piezo or electronic) or a stun gun. The combustion of the fuel releases energy and creates a spike in pressure that propels the ammunition.

Hybrid launchers are a special type of combustion launcher using a fuel/air mixture that is compressed to a pressure higher than that of the atmosphere. The name Hybrid was coined when these types of launchers were described as a mix of a pneumatic launcher and a combustion launcher, though this is a bit of a misnomer. While hybrids do utilize a pressurized chamber system, this is where the similarities with a pneumatic launcher end. The operation of a hybrid is much more closely related to that of a combustion launcher, the main difference being the use of a Burst disk in most hybrid systems. While pneumatic cannons get their power from releasing the potential energy created by compressing gases, hybrids get the energy they use for launch from the potential energy stored within the chemical bonds of the fuel/air mixture. The pressurization of a hybrid is mainly a consequence of forcing more fuel and air into a smaller chamber, and is not intended to be a method of propulsion.