A spud cutter or muzzle knife is used to cut produce to the diameter of the barrel. It can be made as an integral part of the barrel, or kept as a separate utensil.

It is made by beveling the outside of the barrel (or a pipe of the same inside diameter) until it forms a sharp edge. In combustions, is recommended that you add an inner chamfer to your launcher; this cuts a tighter fitting projectile, which increases friction and therefore acts a bit like a burst disk, allowing the pressure to build before projectile starts to move.

However, there are deficiencies in the typical PVC 'cutter, mainly that it is a relatively soft material and therefore can neither be sharpened very well nor hold an edge. Many have attempted to counter this by: 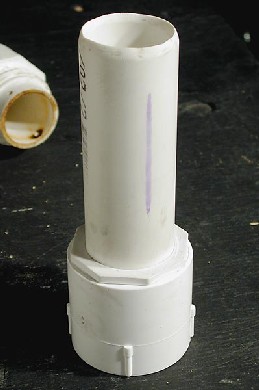