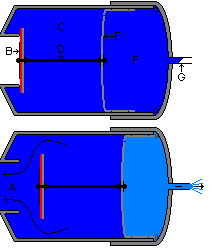 Cross-section of toolie-style piston valve; A is barrel, B is sealing face, C is chamber, D is drive rod, E is piston, F is pilot volume, G is pilot valve.

The toolie's type valve consists of an air chamber. At one end (the pilot end), a large piston sits which is the same diameter as the inside of the pipe. A long rod (threaded rod, smooth rod, pipe nipple, whatever) reaches all the way to the other side of the chamber, where it ends in a sealing face only marginally larger than the outside diameter of the barrel. This rod also usually has a spacer to center it in the air chamber.