Timed Valve vs Dump Valve for more power and efficiency

Most of the pneumatic projects on this forum use dump valves that essentially empty the chamber for every shot. Semi-automatics based on quick exhaust valves piloted by 3 way valves look something like this:

A main chamber feeds a firing chamber, with the latter being completely emptied for every shot. While it certainly works, this system is very wasteful. Not only is air still being fed through the barrel long after the projectile has left the muzzle, but the average pressure in the barrel is bound to be low unless an impractically large firing chamber is used.

The ideal valve therefore would open and close very quickly, before the projectile has left the muzzle. A hammer valve is a practical way of achieving it, which is why it is the most commonly used valve in commercial pneumatic airguns. They are difficult to scale up however, so the compromise for "spudgun" sized calibers would be a hammer valve used to pilot a quick exhaust valve on this principle:

I plugged some numbers into GGDT to make the point, for a 3/4" caliber launcher firing 30 gram projectiles at 150 psi. One has a chamber with the same volume as the barrel that it dumps for every shot, while another has a chamber 10 times the volume of the barrel, with a valve that closes when the projectile is about 50% of the way down the barrel. 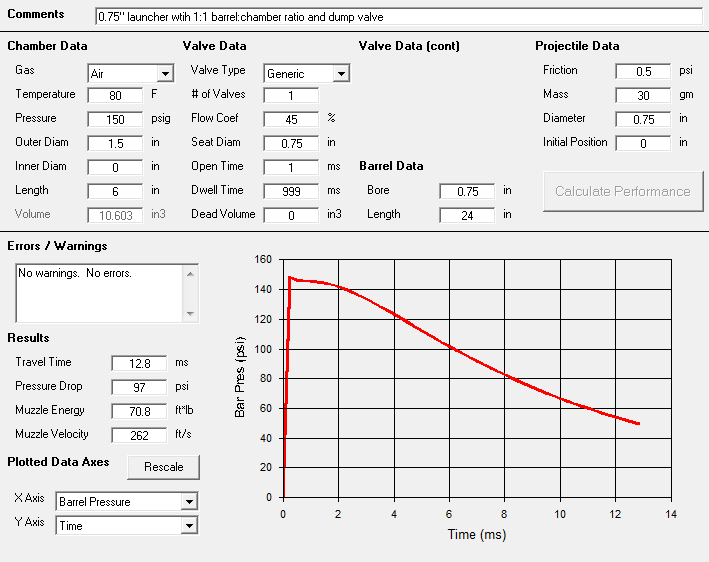 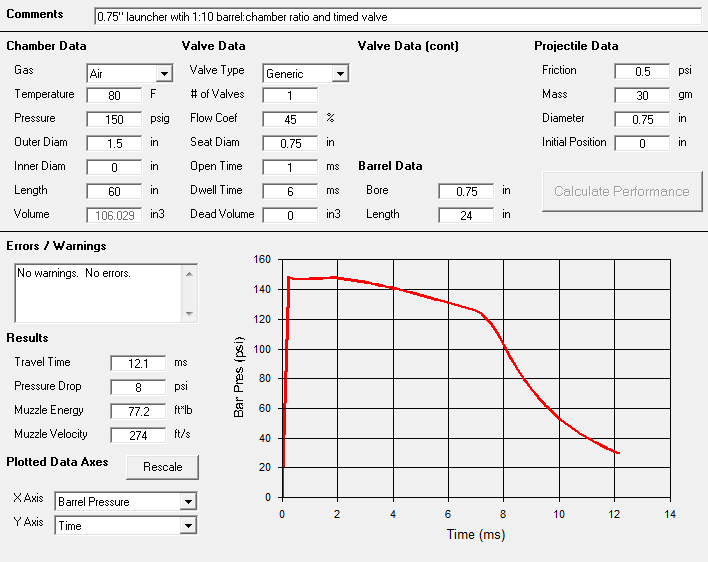 Even though the valve is open for a shorter interval, the average barrel pressure is higher in the case of the timed valve with the larger chamber, resulting in a higher velocity. The barrel pressure at projectile exit is also lower, meaning the launcher will also be quieter, a consequence of its greater efficiency.

In terms of gas usage, let's say we started with a 106 cubic inch chamber at 150 psi in both cases, with this chamber feeding the 10.6 cubic inch firing chamber in the case of the dump valve launcher.

In the second case, the pressure drop is only 8 psi to 142 psi. This means that in the case of the timed valve, we only used about half the air that we used for the dump valve, and yet obtained a performance increase of around 20% more muzzle energy.

Here is a theoretical 5 shot comparison, giving the dump valve the edge with the firing chamber already being filled to 150 psi, with firing pressure and resulting projectile muzzle energy:

The difference is quite dramatic and something to consider when designing pneumatic repeaters.

Is that like Swan Donavons adjustable volume QEV exhaust ?

In the sense that it uses a momentary pilot for the QEV, yes.

This is important stuff!
Top

Excellent reading material! Good luck Jack! :bounce:
Applied to my hybrids, they are the answer that I intuited and now I am sure, regarding the noise and energy of the weapon. The retention by o'ring reduces the noise, because the pressure falls in the firing barrel and is moderate in the muzzle of the weapon. Without the retention, the opposite case, the barrel has a lot of pressure, (it is part of the combustion chamber in this case), and therefore the loud noise, although the power is much lower in this second case. I mean the power to pierce things. This I have tested neatly. This article gives me the explanation, although oriented to the pcp, it seems to me that it is applicable to a hybrid of similar caliber.
I am the author of the first semi-automatic hybrid, check this out

Good observations, of course in a hybrid there is no point in "timing" a valve because you're not going to be able to use any energy remaining in the chamber, however there are some parallels.

The main takeaway is that a small chamber with a burst disk that fails at a high pressure is going to give you more energy and efficiency than a large chamber and a low failure pressure. Lower muzzle noise is a direct consequence of this efficiency as pressure drops further before the projectile leaves the barrel. This is a known phenomenon in firearms too where using subsonic cartridges in long barrels results in a similar effect. The Metro Gun long barreled shotgun is an extreme example of this. 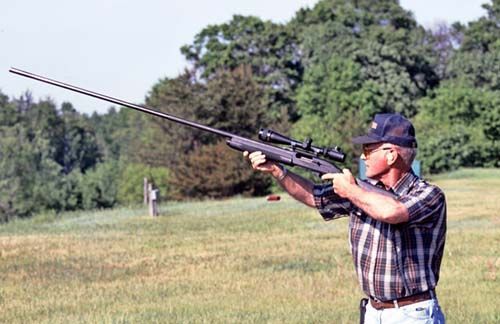 Just that.
My analogy is with a subsonic turbojet nozzle, which ejects the gas with a lot of pressure in the outlet area of the nozzle, it does not have as much speed or performance as a nozzle that causes the pressure to drop to values close to atmospheric pressure. In the first case, the velocity of the gas jet is smaller, and in the second, higher, and consequently, if the thrust, basically, is the mass flow of the gas multiplied by its speed, the thrust increases.
A firing gun could be considered a "motor" that transforms pressure energy into kinetic energy. The higher one of these, the lower the other, the energy being more or less constant.
A firing gun should use the greatest amount of pressure energy, in kinetic energy which is what makes interesting holes to see.
I like holes!

The very definition of masculinity! Admiring holes and finding new and interesting ways to make them