Is it feasible to have a dart/nail ride in a O ringed sealing piston that is released at the muzzle while the piston stays behind for another shot?

The issues here are that A) there will be lots of high pressure air behind that piston, and it will have to go somewhere. Vent holes would solve that.
B) that piston is going to be moving FAST. In fact, that piston is going to be moving exactly as fast as the nail, which means that it will have a fork-ton of kinetic energy. When it collides with what ever sort of bumper you stick on the end, to keep the piston from leaving, it will either smash it to pieces, or if you make the piston light enough to not smash the bumper to pieces, it will smash itself to pieces.


That being said, it has been done before. Some silent guns, designed for secret agents have used this technique to contain the gases until they cool. Also I believe they made a few grenade launchers that function similarly.
Do not look back, and grieve over the past, for it is gone;
Do not be troubled about the future, for it has not yet come;
Live life in the present, and make it so beautiful that it will be worth remembering.
Top

Lentamentalisk wrote:The issues here are that A) there will be lots of high pressure air behind that piston, and it will have to go somewhere. Vent holes would solve that.
B) that piston is going to be moving FAST. In fact, that piston is going to be moving exactly as fast as the nail, which means that it will have a fork-ton of kinetic energy. When it collides with what ever sort of bumper you stick on the end, to keep the piston from leaving, it will either smash it to pieces, or if you make the piston light enough to not smash the bumper to pieces, it will smash itself to pieces.


That being said, it has been done before. Some silent guns, designed for secret agents have used this technique to contain the gases until they cool. Also I believe they made a few grenade launchers that function similarly.

An air ram uses a space between the piston and projectile to become compressed and then re-expand slowing the piston and further increasing the energy in the projectile. If there is a transition on barrel size in between the energy transfer between a high mass piston and lower mass projectile can become fairly effecient with the piston at low velocity to stopped at the end of travel. I'm playing with the numbers to make this a reality in the future. Seeking to launch golf balls supersonic with just compressed air.
My First QDV tested ABS DWV for compressed air - Competition QDV cannnons - The Mouse Musket
Top

Lentamentalisk wrote:That being said, it has been done before.

No kidding, herewith some examples of this application:

The Russian SP-4 "closed circuit" cartridge fired by the PSS pistol. The idea is to make a noiseless shot by not allowing the propelling gasses to leave the cartridge. This means that the bullet is not actually pushed by the gas itself but by a piston. It works like this: 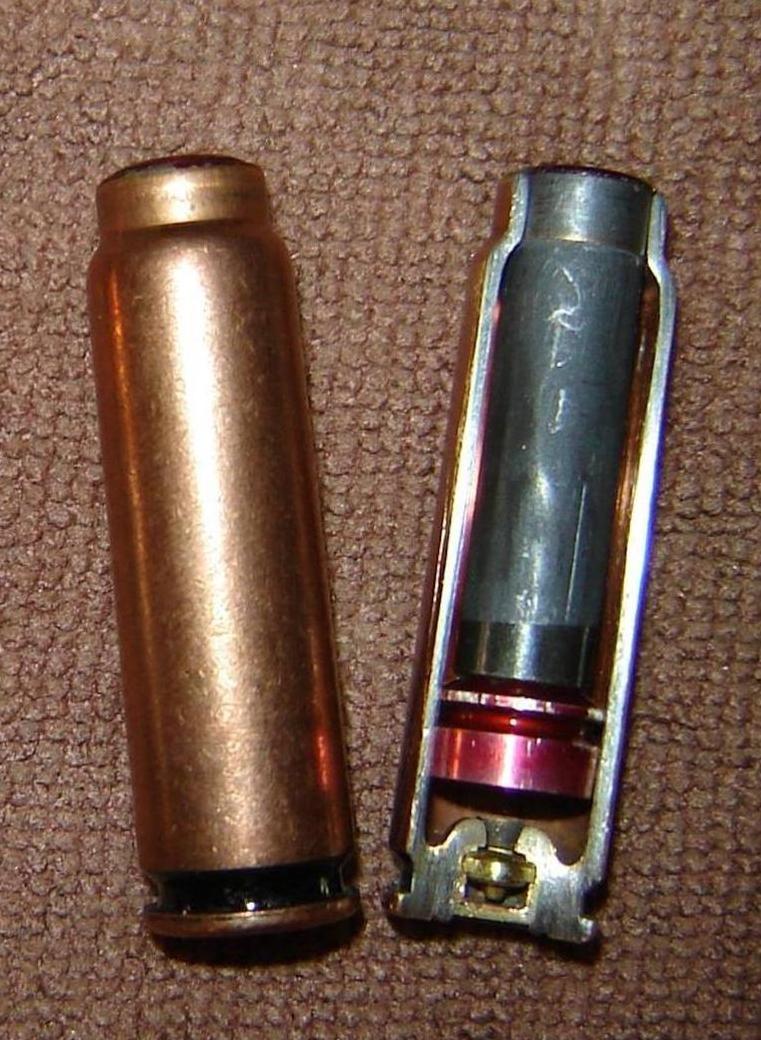 The "Device D" and "Device DM" operate on a similar principle but using a bigger cartridge to fire a grenade or large solid bullet. 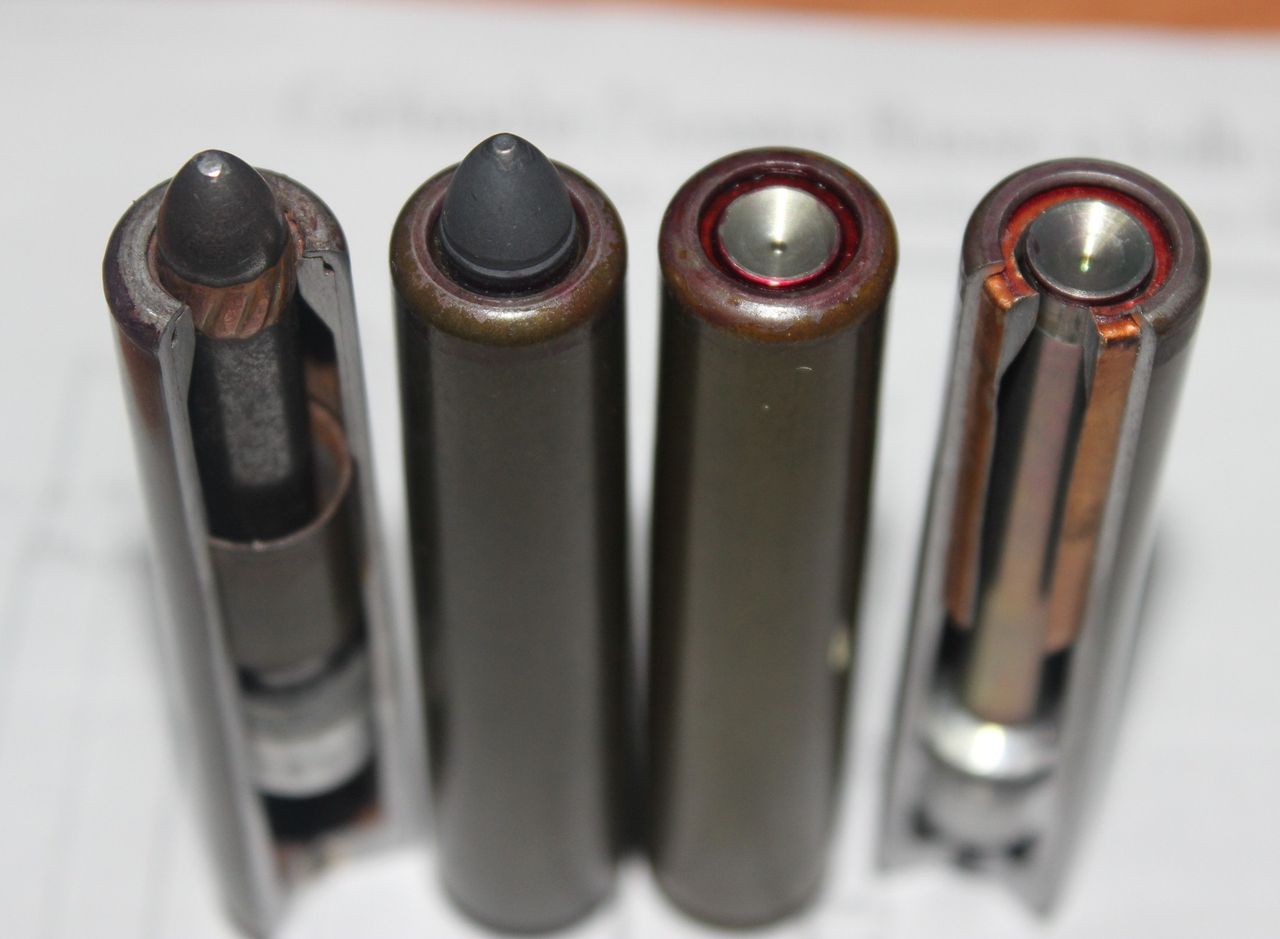 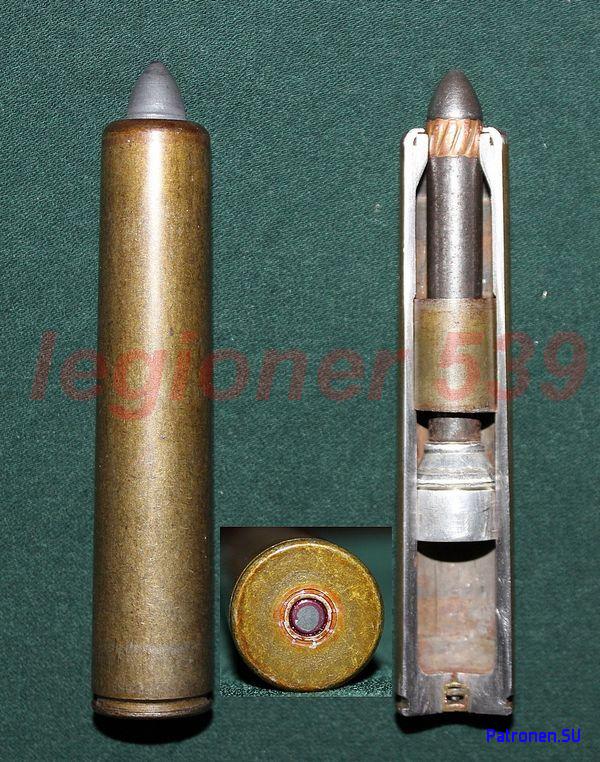 The BS-1 "Tshina" uses the same concept but operates with separate blank cartridges. 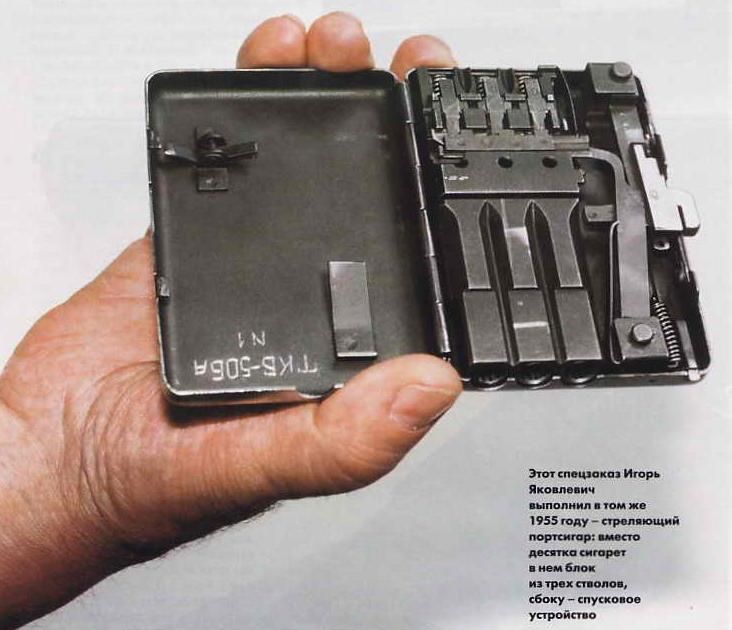 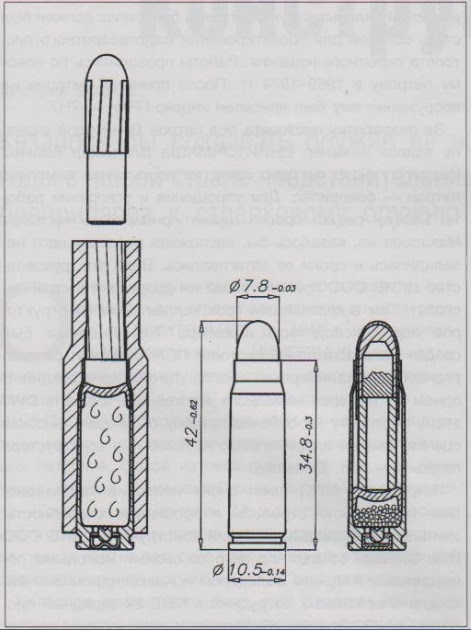 The Americans also developed a 12 gauge cartridge on the same principle for use in the tunnels of Vietnam, that used a metal diaphragm as opposed to a piston in the Russian designs, the AAI "Telecartridge" 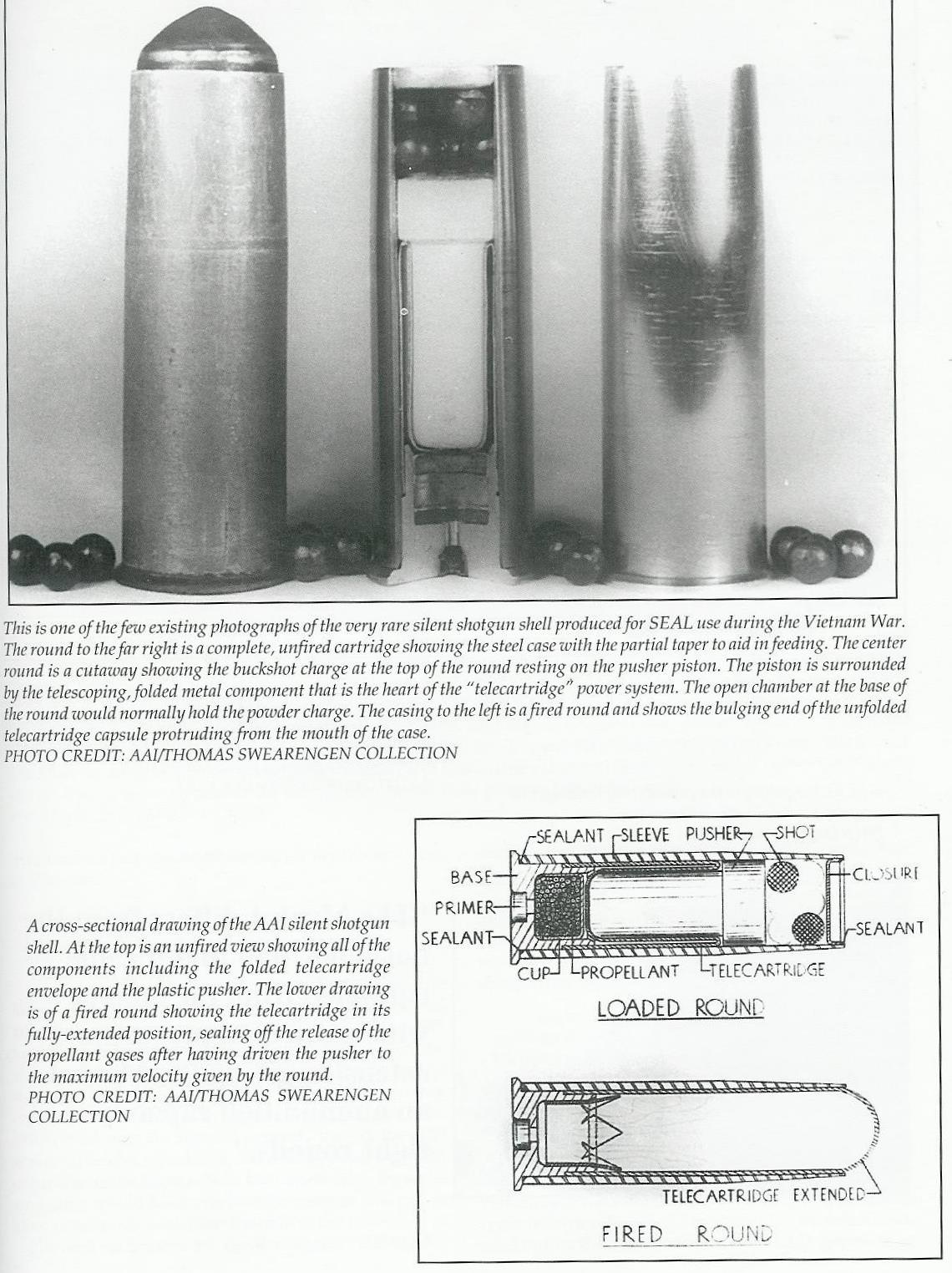 Also for the Tunnel Rats they developed another cartridge used in the Quiet Special Purpose Revolver which fired 15 tungsten balls each with the muzzle energy of an adult 0.177 air rifle.

The H&K P11 underwater pistol also uses a captive piston to fire darts underwater without a massive expulsion of gas from the explosion.

AAI in the US also patented and made a similar revolver.

The Yugoslav "Self Suppressing Unit" was another underwater gun that fired darts on the same principle: 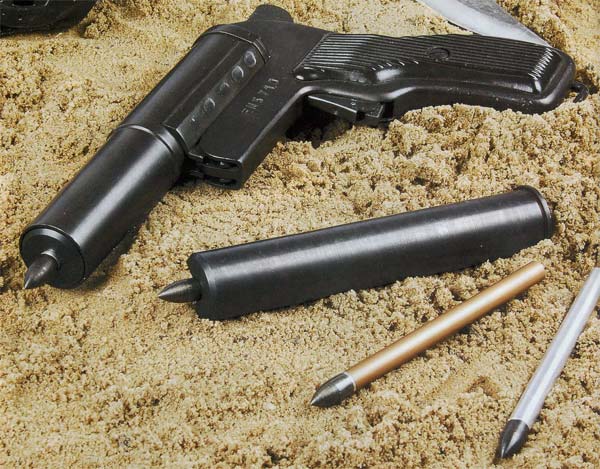 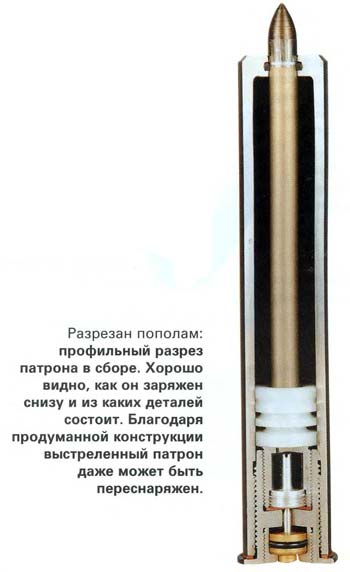 There are also a number of patents using this system, some over a century old:

Using fluid as a transfer medium

sweet. i had a similar idea a while back. i'm glad to see that it's a solid concept.
WHY PAY FOR IT WHEN U CAN MAKE IT?
Top

Crazy, I thought of this recently myself! I thought about having some sort of two piece sabot with cables or bungees attached to it somehow so it is able to leave the barrel and slow down using air resistance first, then the wires. The sabot would have to avoid getting jammed by the wires though. Go for it man!
Top

Thanks guys, I am delighted to be in a forum where there is a great depth of knowledge and where questions are taken seriously.

My concept is the shoot the nail, the rubber bumper sabot is positioned at the muzzle.


Replace the nail, and using a tubular ram, reload.

The challenge is to keep the nail attached to the sabot with enough force so as not to be separated within the barrel and without too much force to slow it down a lot when it leaves the muzzle.

One idea that just popped into my head is a flexible sabot that tightens around the nail as it is rammed into the funnel/flared shaped muzzle.

Next, a stop mechanism is screwed or clamped at the muzzle to capture the sabot after it expanded and has released its nail passenger.

The real challenge is making your launcher strong enough to resist the impact of the sabot, you definitely need some sort of rubber/spring damping at the impact area. It would be best to go with foam sabots or something similarly light and soft.

Another idea used in many nail and bolt guns is to have the sabot shaped like a cone, impacting in a cone shaped damper. This increases the contact area and spreads out the shock.

Also consider that the sabot is going to be travelling as fast as your projectile, so it's worth using a heavier projectile that will keep overall velocity low, reducing stress on your launcher, but still carry a lot of energy when it leaves the barrel.
Top

I've wondered about the same idea but mostly just to reduce the time spent making/finding sabots.

One idea I came up with was to have 30 feet of string coiled up in a hollow base that could unravel as if flew through the air and make finding the bloody things easier.

Still haven't tried it yet.
Top

I've actually made a captive sabot-piston-thing...

Let me tell you, it sucks compared to just firing the projectile with a straight air blast.

You also need to vent out the barrel afterwards because the piston seals the air in.
Copperhead Prime: 14mm 240psi Bullpup Cannon
Copperhead Pocket Launcher: Ultra Compact Rocket Launcher
How To: Make a Stungun with a Disposable Flash Camera
Top

Found another real world example, an early Russian system made for the Nagant revolver, the "беззвучного револьвера" or "Bezzvunogo revolver". It's a 0.22" projectile in a 0.38" sabot, and the muzzle has a revolving drum which allows the sabot to be ejected for another shot.

Normally revolvers cannot be suppressed effectively because of the gap between cyliner and barrel, but the unique Nagant action forces the cartridge forward on firing, allowing the brass to expand and effecively seal the gap. 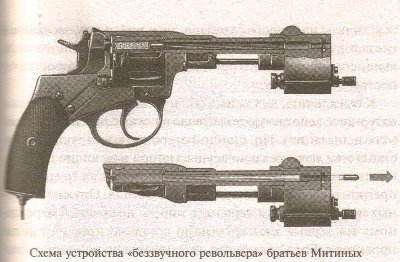 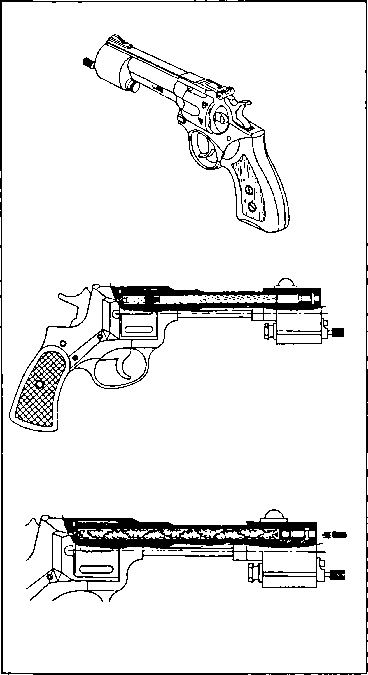 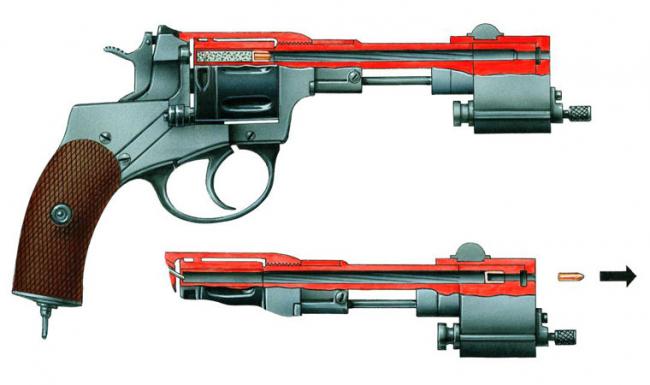 Another example for the catalog of uses for such a system, this time from WWI for the 2 inch medium trench mortar.

I was unable to dig up any images but here is a description from "A MUSE OF FIRE - British Trench Warfare Munitions, their Invention, Manufacture and Tactical Employment on the Western Front"


Some were evaluated but none was adopted by the BEF, although the French made limited use of a 105 mm pneumatic mortar which the Germans then copied. Such mortars were largely silent and produced no muzzle flash so that they were difficult to detect but they were more complex than conventional mortars and had slow rates of fire. Noise and flash were the tell-tale signatures of a trench mortar which, once detected, often prompted a retaliatory artillery bombardment. Almost from the outset, inventors began experimenting with attachments to suppress muzzle flash, smoke and noise but only one, the Temple silencer, was adopted.

This was invented for the 2-inch medium mortar which was particularly loud and produced a considerable muzzle flash and a limited number of silencers were available from spring It comprised two elements: a muzzle attachment in the form of a chuck, with spring-loaded cones, which restricted the bore at the muzzle to 1.5 inches; and an obturator at the base of the stem. The bomb now had to be fitted with a stem of 1.5 inches diameter, rather than 2 inches, but which widened where it joined the body of the bomb to allow existing bombs to be used with the silencer. The obturator served to centre the stem in the bore and to prevent the propellant gas escaping from the muzzle. It was an imperfect solution, however, as it caused the barrel to overheat which severely reduced the rate of fire. An overheated barrel could cause misfires and prematures.

Prematures were a constant problem with trench mortars. Up to fourteen casualties a week could be attributed to prematures with the 2-inch mortar. No more than six rounds could be fired at the rate of one round a minute before the barrel had to be cooled. Thus, silenced mortars tended to be used only for night firings when muzzle flash was especially noticeable. The silencer could be fitted and removed quite easily so that dedicated silenced mortars were unnecessary. To load and operate a mortar fitted with the silencer was a rigmarole, especially after having discharged a round. The silencer worked by trapping most of the propellant gases in the barrel which then had to be released by opening the chuck. At the same time, the obturator, which had been stripped from the stem on firing, was ejected from the muzzle. Trapping the gas caused condensation in the bore which had to be sponged out after each round. It was a far from ideal solution although it did perform the job it was intended to do.