This is an idea I had a while back, which was to dispense with the valve altogether and use the projectile to seal the air chamber, locked in place until it was ready to fire. This would be to all intents and purposes the most effective "valve" happy red? :p I could think of.

The prototype I actually made had a bolt as a projectile stopper and used 0.22 airgun pellets which gave a good seal on the barrel. The performance however wasn't any better than my mini-piston designs so I shelved the idea as not offering sufficient benefits to warrant the awkward method of operation.

The disadvantage is that you need a projectile that's a 100% airtight fit in the breech, which also has to be of strong enough construction to retain the pressure behind it without collapsing. Still, for those seeking ultimate performance, it might be a workable idea.

For more detailed information on using epoxy, check out the how-tos here and here. 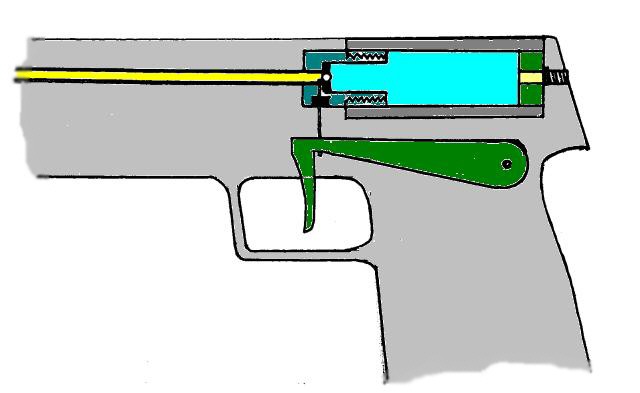 views of the actual prototype, from top to bottom:

1)rear view of breech and barrel assembly
2)view down the barrel, you can make out the end of the bolt sticking out - note that it only has to enter the barrel a tiny amount to jam the projectile in place.
3)breech threaded to a blowgun for low pressure testing
4)High pressure chamber for 300 psi+ testing. 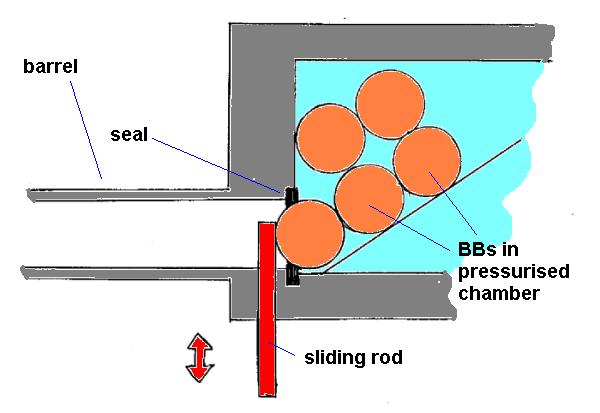 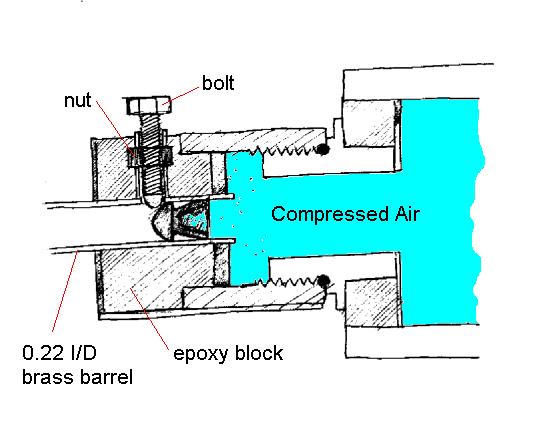 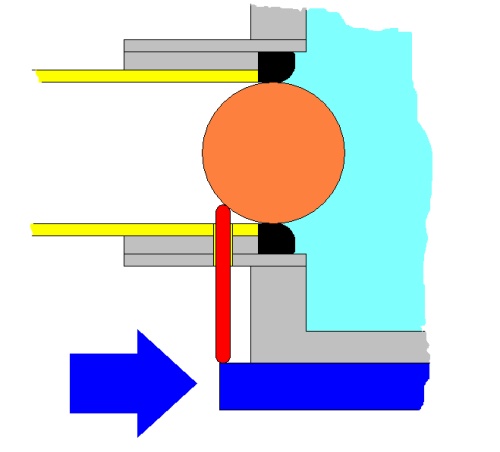 bravo jack, your ideas keep on comng and there always good.I never would have thought of that.That is a good idea maybe for a sniper?

A one shot pistol is pretty annoying (in my books).
Poo.
Top

So a valveless gun with the most effective valve you could think of? That made me laugh.

But in all seriousness that is a really good idea. I might just make one this weekend... Providing I find money.
Top

Knowing you and your epoxy skillz, I think you could make it. Good luck. What kind of projectiles do you have in mind, seeing as they need to seal?
Top

i think you would have to pull the trigger fairly fast, but it should work, if you can ge it to seal.
"physics, gravity, and law enforcement are the only things that prevent me from operating at my full potential" - not sure, but i like the quote

sorry guys but I pressed the "submit" button too early (d'oh!) I actually made a prototype of this, check the edited post

Its like a burst disk on steroids! (not really?)

Nice design here... I am surprised that you were able to get it to seal.

It would be interesting to compare this to a burst disk gun of similar size.
Top

well another one of your wonderful innovations has been put into my "stuff to build" file in my favorites. once again good job jack, like usual.
Top

rmich732 wrote:Nice design here... I am surprised that you were able to get it to seal.

It sealed easily without any rubber because the soft lead skirt of the pellet "inflates" and seals agaisnt the barrel. This is after all the same way that brass cartridges seal the propellant casses inside firearms.

AH so it works off the pricipal of grease seals on a car axle, where its cupped to one side, the side it seals so that it helps hold pressure. thats ingenious.
Top

I like your chamber. Where did you get it? Or how did you make it?
Airbeds... so many different uses
Top

shud_b_rite wrote:I like your chamber. Where did you get it? Or how did you make it?

I made it myself, as per attached diagram. 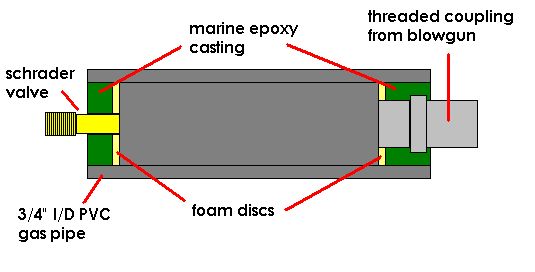 That's a great idea, but wouldn't the pellets wear down the barrel after a while, since they expand to fit the barrel perfectly? It seems like they would scrape the sides the whole way down the barrel.
Top