As you all probably know at last stages of WW2 Nazis resorted to their Wonder weapons or Wunderwaffe (miracle weapon) which in most cases were just propaganda tools and were not real but some projects existed and many experimental weapons were created. Recently I read a book called Inside the Third Reich by Albert Speer, who was the Minister of Armaments and War Production in Nazi Germany during most of World War II. He mentions some of this Wunderwaffe projects and interestingly, he wrote about one occasion when some scientists asked him whether he could provide specialized parts needed for construction of a Ray Cannon. Even he was skeptical, but nevertheless managed to provide the scientists with all the parts except for one critical component which could not be produced by technology of that era. I guess they were really desperate so they experimented with everything.

Back to the subject, years ago as a teen I found info about this Nazi Sonic Cannon but never really thought about it until recently. Here is a photo of it. 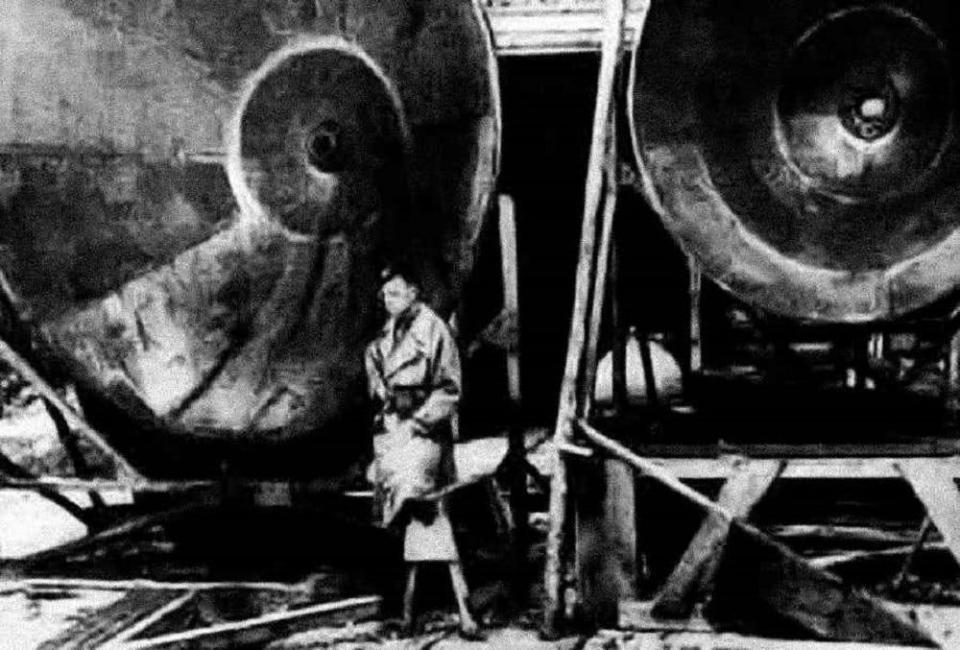 Basically, this cannon incapacitates humans by causing fatal vibrations in the body. Sound pressure waves are generated in the methane gas combustion chamber, which pulse detonated at a frequency of about 44 Hz (44 pulse detonations per second). This chamber leads to two parabolic dishes which magnify these produced sound waves or pressure waves.

It could cause vertigo and nausea, by vibrating the middle ear bones and the fluid in the inner ear. Since our bodies are mostly water, and sound pressure waves travel through water I guess this frequency can damage cells and tissue by vibrating water molecules in them, 44 Hz is a lot.

I am sure some people will not understand precisely what I say so here is the link from Wikipedia that explains how this cannon works.

I am sure you probably experienced how sound travels through your body, for example, if you ride in someones car that has huge strong speakers. I experienced that several times, you can feel it in your chest.

Do you have any clue how such combustion chamber should look like? How would you design it? If you have any information about this, please send it to me. Can you hypothetically then build an automatic combustion cannon if you replace these dishes with a barrel and a magazine similar to a paintball gun?

One last thing, what if you build a huge burst disc hybrid cannon that has a big parabolic dish for focusing or magnifying pressure wave instead of a barrel? Could that thing potentially damage someone's ear drums if you aim that dish at a person, for example at 5-10m distance(I am not advocating for the construction of such a device)? Food for thought.
Top

My question to you is how this methane combustion chamber is able to generate 44 pulse detonations per second (44hz)?

As long as you're discussing cannons and not the monstrosities that they committed to innocent people and other living things, it's good.
Look if you must.
Top


“…design consisted of a parabolic reflector, 3.2 meters in diameter, having a short tube which was the combustion chamber or sound generator, extending to the rear from the vertex of the parabola. The chamber was fed at the rear by two coaxial nozzles, the outer nozzle emitting methane, and the central nozzle oxygen. The length of the chamber was one-quarter the wavelength of the sound in air. Upon initiation, the first shock wave was reflected back from the open end of the chamber and initiated the second explosion. The frequency was from 800 to 1500 impulses per second. The main lobe of the sound intensity pattern had a 65 degree angle of opening, and at 60 meters’ distance on the axis a pressure of 1000 microbars had been measured. No physiological experiments were conducted, but it was estimated that at such a pressure it would take from 30 to 40 seconds to kill a man. At greater ranges, perhaps up to 300 meters, the effect, although not lethal, would be very painful and would probably disable a man for an appreciable length of time. Vision would be affected, and low-level exposures would cause point sources of light to appear as lines.”

Not sure what the point of such an experiment would be though, you'd end up with a large unwieldy device that would only be capable of making people very uncomfortable.

More relevant to this forum would be the Wirbelwind Kanone: 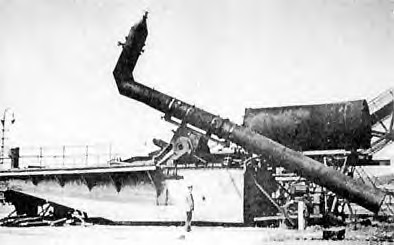 Dr. Mario Zippermayr, an eccentric Austrian inventor working at an experimental establishment at Lofer in the Tyrol, designed and built a series of highly unorthodox anti-aircraft weapons that were observed very closely by the Reichsluftfahrtamt (Office of Aeronautics) in Berlin. Due to the overwhelming numerical air superiority of the Allies every effort was made during the last year of the war to find ways of exploiting any known phenomenon that could bring down the heavy bombers of the USAAF and RAF. Dr. Zippermayr constructed both a huge Wirbelwind Kanone (Whirlwind Cannon) and Turbulenz Kanone (Vortex Cannon). Both had the same goal – to knock down enemy bombers through clever manipulation of air.

To achieve this, the “Wind Cannon” used a detonation of hydrogen and oxygen to form a highly compressed plug of air that was channeled through a long tube that was bent at an angle and fired like a shell towards enemy aircraft. Impossible as this may seem the Wind Cannon did particularly well on the ground – breaking one inch thick wooden boards from a range of 200 yards! This promising development, however, meant nothing against the Allied bombers that were flying at 20,000 ft!

In the words of noted artillery expert Ian V. Hogg, "Were one to be attacked by 4 inch wooden spars at a range of 200 yards it would doubtless have been an ideal weapon, but getting the vortex up to more practical height was an insuperable problem, and the Vortex gun never achieved success."

Who wants to build this ?

Thank you guys for all the valuable info.

It seems like there are lot of ways to design Sonic weapons, and by tunning frequency, wave length and amplitude different organs or parts of central nervous system are affected.

Anyone knows if Sonic weapons are used in warfare or they are banned like blinding lasers?
Top

jackssmirkingrevenge wrote:The chamber was fed at the rear by two coaxial nozzles, the outer nozzle emitting methane, and the central nozzle oxygen. The length of the chamber was one-quarter the wavelength of the sound in air. Upon initiation, the first shock wave was reflected back from the open end of the chamber and initiated the second explosion.

Pretty much a pure helmholtz resonator, then. Rather like the Reynst combustor, but not relying on the helmholtz effect for fuel and oxygen feed. Interesting stuff.
Top

Who was it here who was making the noise/sound guns? from Korea? they were works of art.
Top

farcticox1 wrote:Who was it here who was making the noise/sound guns? from Korea? they were works of art.

From Japan and they are indeed masterpieces.

I was researching a bit today and found two interesting sonic weapon patents.

First one can be used as a long range communication device and as a weapon. It is complicated, especially when it comes to sound output, but from the illustration you can see that it constitutes of an acoustic mirror (parabolic dish) mounted on a truck trailer, and a sound source mounted on another trailer in a focal point I guess.

The second device has drawn my interest, and several ideas popped in my head. I might build a sonic weapon in the future, just for fun. Here is the text from the patent page as I'll probably describe it differently.


An acoustic cannon has a plurality of acoustic sources with output ends symmetrically arranged in a planar array about a central point. Pressure pulses are generated in each acoustic source at substantially the same time. The pressure pulses exit the output ends as sonic pulses. Interaction of the sonic pulses generates a Mach disk, a non-linear shock wave that travels along an axis perpendicular to the planar array with limited radial diffusion. The Mach disk retains the intensity of the sonic pulses for a time and a distance significantly longer than that achievable from a single sonic source. The acoustic cannon is useful as a non-lethal weapon to disperse crowds or disable a hostile target.

Never heard of a mach disk before, learned a new thing today.
https://en.wikipedia.org/wiki/Shock_diamond

Here are the illustrations. 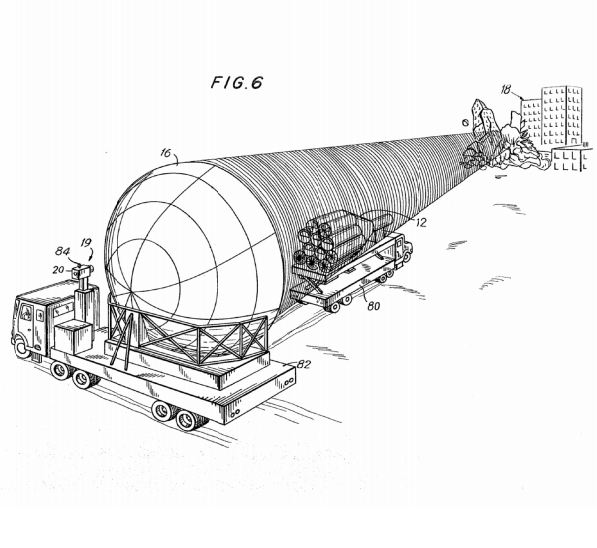 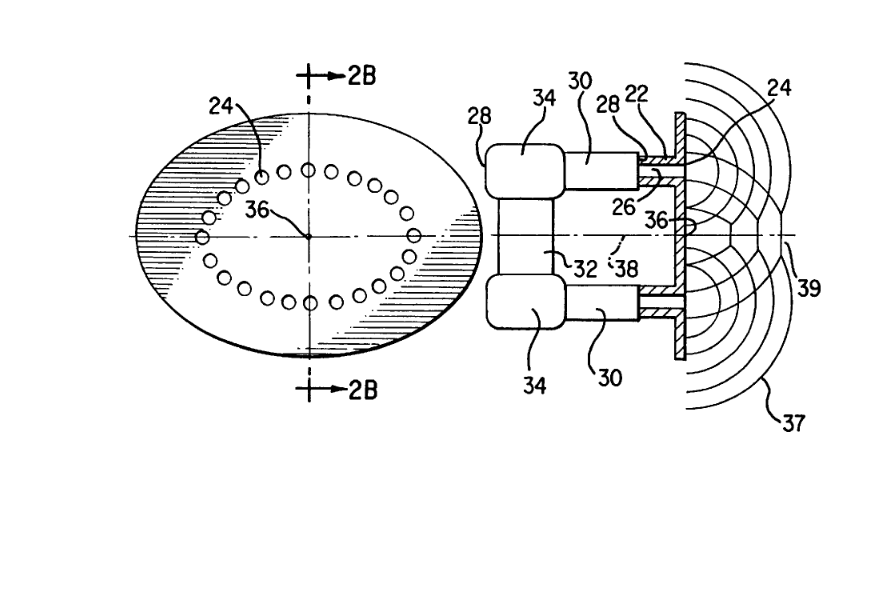 Doctore wrote:Anyone knows if Sonic weapons are used in warfare or they are banned like blinding lasers?

Doctore wrote:Anyone knows if Sonic weapons are used in warfare or they are banned like blinding lasers?

Yeah, I know about this thing. Looks like something from George Orwells 1984.

Wonder what the other countries have, like China or Russia.

Here is also one directed energy weapon, although not sonic weapon. It uses microwaves to heat targets to produce unbearable pain.