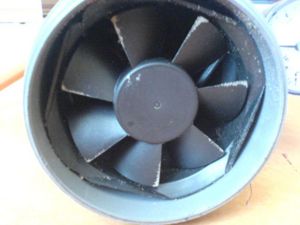 A 92mm chamber fan at the back of a cannon.

A chamber fan is an improvement mostly used in combustion cannons, though hybrid cannons sometimes also have one. The fan will improve muzzle velocity, power and usability. It is a recommended upgrade and may improve the power of your cannon with 20-50%. Sometimes more then one fan is used. For exact information on performance gains see this latke test.

They have multiple purposes:

Another purpose is venting. After each shot the burnt fuel mixture needs to be removed from the chamber and replaced with fresh air. This is because (almost) all oxygen is used during the combustion and new oxygen is needed for combustion during the next firing. When the back end of the chamber is opened using either a cap or some other system, like a ball valve or quick vent plug, the fan effectively blows out the combusted fuel and sucks in fresh air. With a chamber fan, venting is done much more quickly and reliably.

If the chamber fan is left on during combustion, it has one last potential purpose: turbulence is induced because the air inside the chamber is moving. This causes the flame front to speed up, and thus the combustion occurs more rapidly. This further increases the performance of the cannon. Theories exist which state that two smaller fans blowing in opposite directions induce more turbulence. However, they may be less effective at venting.

The most commonly used fans are case fans out of computers. The corners may be sanded down so it fits in the chamber, and sometimes the complete frame around the fan is cut off and even the fan blades need to be cut for fitting it into in small chambers. Instead of PC fans you could also use any other electric motor with fan blades attached. However, you should avoid brushed motors at all times. PC fans have brushless motors and thus do not create any sparks within. A brushed motor could spark with the possibility of suddenly igniting the fuel mixture, which can lead to accidents damaging the environment or even harming people. So now and then someone still uses a brushed engine but sealed the holes in the housing off with glue, making sure no fuel can enter the insides of the engine. The engine wont be able to cool itself anymore, but when used in short periods, that doesn't really matter.

Since PC fans are cheap, brushless and readily available in various sizes, this is the choice of most spudders and the most recommended option. Further characteristics of fans are noise, CFM (the amount of air it displaces) and RPM (how fast it rotates). Noise doesn't really matter for a cannon, and you probably want to have an high CFM, high RPM fan for some good mixing.

Powering, wiring and mounting the fan

Nearly all fans are powered by a pack of batteries. A 12V fan can be ran off a single 9V battery (though it will not run at full power) or a bunch of 8 1.5V batteries. It is also useful to have a switch to turn the fan on and off. It can also be controlled automatically using a timer circuit which turns the fan off when it's not needed. For a good looking cannon without duct tape and wires all over it, you build all the fan circuitry and batteries into a fan control box. Since the same can be done with ignition systems in a ignition control box, some people merge it together into one fan/ignition control box. This gives the advantage of running a fan and a stungun from the same batteries, saving space and weight. Sometimes this box is built in the handle for an even cleaner look not showing any wires.

The easiest way of doing this is having a PC fan which is a bit too large. Sand down the corners until it fits in tight and squeeze it in. The fan will stay in place due to friction. Glue can be used to secure the fans and sometimes bolts are used too.

Since the batteries and possibly switch are outside the chamber while the fan is inside, you will need to get those two wires to the fan someway. A leak free way of doing so is screwing in two bolts trough the chamber wall (preferably drill through both the pipe and fitting so you've got two layers of PVC/ABS.) Then attach the wires on the inside and the outside to the bolts and your done.

It is not recommended to place the fan too much near the barrel opening. Remember that all air behind the fan wants to go past it and if that is too much you will constrict flow to the barrel and most importantly: your fan will probably break. Most fans are at the back of the chamber so they can easily be taken out for service on the chamber or the fan. Note that you cant take a fan out when the electrode bolts are in the way.

Will my fan survive the combustion?

If you think that your fan might get burned or melt, don't worry, it wont. Since the heat in the combustion chamber lasts no more then a few milliseconds the fan doesn't have time to heat up or melt. As stated above, your fan should not be too close to the barrel. If its more to the back, it wont get blown to pieces due to the extreme flow.

A fan may have a somewhat shortened lifespan inside a combustion chamber, but it still can survive for many years. So for combustion cannons: Yes, your fan will survive.

In hybrids fans last shorter due to the more extreme environment. High-mix hybrids can break their fans on the first shot. Luckily, those hybrids don't need fans anyway. When you pressurize the fuel mixture with air after you have put in the fuel, the blow-in of air already mixes the fuel. Also because of DDT dangers you don't want to have turbulence anyway.